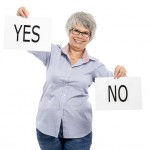 The goals of the review were to: The study identified three types of decision-making situations, including medical treatment where family carers tended to take the decision with the doctor

This strategy retrieved 850 unique articles, but it’s possible that un-indexed or incorrectly indexed articles were missed. Articles not written English or published in peer-reviewed journals were not searched for.

Moreover, as only three databases were searched, though extensive, the range of studies considered for inclusion in the review was not comprehensive. It is unlikely to matter a great deal, but this is a common limitation of reviews which is worth considering.

The abstracts of the 850 articles were screened and whittled down to 36. All 36 were reports of observational or experimental studies looking at the involvement of patients and carers in decisions about care.

The 36 studies were described as ‘diverse’ and it would have been helpful to have this diversity illustrated graphically to allow easy comparison of study characteristics such as number of participants, research design, and most importantly, research quality, which will all have a bearing on the reliability and usability of findings. Preferences and expectations versus reality

In four of the studies researchers asked people with dementia whether they wanted to be involved in decision-making. The overwhelming majority did want to be involved, and preferred to take the lead in making decisions about their own care.

However, other studies showed that the reality was that even when cognitive impairment was mild, only a very small proportion of patients made the final decision over their care. Most of the time there was some sort of process leading to a consensus decision taken with a family carer.

Some studies included descriptions of where family carers made assumptions about the values and preferences of the person with dementia and then made a decision on that basis without consulting them directly.

Without buy-in for a shared-decision making process by the family carer, and without intervention from professionals, it is extremely difficult to achieve meaningful involvement however much the person with dementia may want and expect it.

The ways in which non-modifiable factors such as the level of cognitive impairment, gender, age and educational level affected shared-decision making were described in some studies.

Only five studies looked at the influence of factors which could be modified, such as poor quality of life, increased carer burden and depression on shared decision-making, and unsurprisingly found they had a negative impact.

One study looked at strategies employed by carers to promote the autonomy of people with dementia, but it did not measure the effect this had on their involvement in decision-making

For everyday care decisions such as eating, socialising, grooming and handling money, seven studies looked at the extent of patient involvement, but only four of those used a recognised scale to measure it in ‘dyads’. (In research jargonese, ‘dyads’ refer to a family carer/patient pair, usually husband and wife or parent and adult child.)

The same number of studies looked at decision-making about medical treatment, and found that although most people with dementia would prefer to be involved in decisions, the majority of family carers indicated that they took these decisions on their own in consultation with physicians. Without buy-in from family carers and professionals, it is difficult to achieve meaningful involvement however much the person with dementia may want and expect it

My mother was diagnosed with vascular dementia in 2011 and my feeling is that her role in decision-making pretty well stopped as soon as her memory, mood and confidence deteriorated dramatically in 2010.

Before her diagnosis, my elderly father was very concerned about the future and his ability to look after her, so moved them both to a nearby retirement apartment complex situated next door to a dementia care home. When they moved there, my mother saw the writing on the wall, and did not like what it said.

The trouble with the theory about promoting shared decision making is that my father is of a generation who persists in thinking that choices are necessarily stark and limited and professional advice is not to be questioned. Despite being highly educated, he is not au fait or interested in psychological theories about the importance of maintaining my mother’s ‘autonomy’ or ‘personhood’. Because of her inability to communicate with him in the way she used to, I don’t think he considers it possible for her values and preferences to be elicited let alone accommodated when making decisions about her care.

The (seemingly) inevitable and much dreaded event has happened. My mother has recently been moved into the dementia home because my father could no longer manage the physical and personal care she needed.

Her (overwhelmingly negative) feelings about the move which she communicated clearly on many occasions were not considered because there were no alternatives expected or offered. I feel – with some guilt at not pushing for it – that there could have been a way of keeping them living together at home, which is what they both wanted. And now it’s too late.

Cut to the chase

My approach when looking at reviews is to try and identify the most reliable evidence about interventions which have the potential to be applied to real-life situations immediately.

In this review there were four studies of interventions. One of those was a pilot randomised trial (Hilgeman 2014) which showed encouraging results for a patient-centred intervention designed to improve emotional well-being and other outcomes including decisional conflict.

The other three observational studies reported promising results for a counselling intervention (Whitlatch 2006 ), an educational intervention (Siverstein 2010), and an intriguingly named communication aid called ‘Talking Mats’ (Murphy 2013). These promising interventions could be developed, and rigorously and independently evaluated to assess feasibility and effectiveness.

The main message I took from this review is that the process of sharing decision-making is more important and beneficial to the person with dementia and their family carer than the outcome of the decision.

People with dementia are able communicate their values and preferences even when their ability to make decisions is severely impaired, and cognitive impairment should not be seen as a barrier to involvement. I hope that many practitioners involved in the care of people with dementia will be moved to apply some of the ideas in the review or the included studies in their own practice, or perhaps get involved in a trial evaluating one of the promising interventions.

Needless to say, the Social Care Elf would be very interested in your feedback and reports of positive action taken as a result of reading this – no action too big or too small!

Murphy, J., & Oliver, T.M. The use of Talking Mats to support people with dementia and their carers to make decisions together. Health & Social Care in the Community 21(2), 171–180 [PubMed]