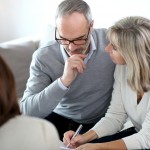 With dementia being the leading cause of death in England and Wales, making suitable arrangements for end of life care is crucial upon receiving a diagnosis of dementia. This should involve both the person with dementia as well as their closest loved ones, such as their husband or wife, or daughter or son. This planning is also named Advance Care Planning (ACP), which the World Health Organisation considers as a discussion about preferences of care with future deterioration of the person with dementia.

‘Cracks in the Pathway’, a recent report by the Care Quality Commission (CQC 2014), the independent regulator of health and social care in England, gives the results of an assessment of the quality of dementia care in 120 care homes and 20 hospitals. Although most care homes and hospitals implemented good care, care was still very variable, ranging from very poor to very good.

Besides the importance of social activities highlighted within the report, and supported by other research in dementia (Giebel et al 2014), the report also highlighted that 33% of care homes and 61% of hospitals showed variable to poor care regarding the involvement in decision making about care choices.

Now, advance care planning (ACP) is all about the decision and wishes of the person with dementia, mostly supported by their family carer, before dementia is so far advanced that the their wishes cannot be taken account of any longer. Therefore, this study by Ashton and colleagues (2014) in the journal Dementia offers an important, qualitative account of the experiences of 12 family carers of ACP in one care home in the North West of England.

Making end of life arrangements should involve both the person with dementia and their closest loved ones.

Semi-structured interviews were conducted with family carers of people in the advanced stages of dementia. Suitable carers were identified through an independent nursing home in the North West of England. The focus of these interviews was on the carers’ experiences of ACP in relation to care setting staff.

One of the main findings was that family carers need some form of encouragement to ask the right and most appropriate questions during ACP in care homes. Looking at the general experience of ACP first, it was interesting that Ashton and colleagues (2014) found that some carers were not even sure what ACP was. Mostly however people felt uneasy during ACP, which either occurred in a planned meeting or in merely an informal chat with a senior nurse.

Although most people felt uncomfortable with the ACP, there was consensus that ACP was an important step within dementia care, and felt positive about being actively involved in choices about their loved one.

Throughout the interviews, it emerged that family carers particularly wanted the person with dementia to be considered as their own person, with their own personality. So, their personal history as well as their current relationships with members of staff in the care home was considered valuable within ACP.

The authors conclude that this study highlights both the benefits of ACP, by involving family carers in important decisions as to the care of their relatives with dementia, and the potential for providing more tailored services to people in the end stages of dementia.

This tailoring and person-centred care is considered crucial by family carers, and is reflected within other guidance from organisations concerned with care and support for people with dementia (Alzheimer’s Society 2013; Royal College of Nursing 2014). Therefore, ACP appears to play a vital role in implementing person-centred care for people with dementia. ACP appears to play a vital role in implementing person-centred care for people with dementia.

This paper does provide an important insight into the benefits of ACP, and the related experiences of family carers. As mentioned above, ACP allows family carers to have an input into getting the wishes and needs of their relative with dementia heard, especially if they are already in the advanced stages and is likely to struggle communicating their own wishes.

However, the sample size is a clear limitation of the study, with only 12 family carers having participated. Although this study is of a qualitative nature, and therefore does not require as many participants as most quantitative studies in order to be considered more reliable, most evidence reported within the study is quantitative in nature. The findings are presented the number of people having had positive or negative experiences; or the content of ACP and its perceived relevance. A larger sample would clearly provide further information.

Also, results may be hampered by the fact that only family carers from one care home were interviewed about their experiences. This will not be reflective of all care homes across England, or even across the North West of England.

Although the clear focus of this study was advanced dementia, ACP is an integral part of dementia care and support planning, and may occur earlier or later within the disease trajectory. Considering that family carers described it as important that their relative’s wishes are understood and implemented, it would be interesting to perform the same study with people in the early stages of dementia. This way, both family carers and the person with dementia could contribute fully. This study highlights an important way of shaping services better to the needs and wishes of those at the receiving end.

In summary, this is an interesting study tapping into an integral area of the dementia diagnosis. Considering the limitations andsuggestions for future research and further exploration, this study highlights an important way of shaping services better to the needs and wishes of those at the receiving end – the person with dementia.