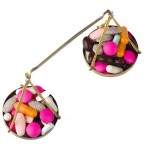 Many people with bipolar disorder have a range of therapies available to them nowadays, including mood stabilisers (or anticonvulsants), antipsychotics and various psychosocial interventions (including CBT, psychoeducation and family therapy).

A research team from the University of Barcelona have published a meta-analysis that investigates the efficacy of drug maintenance treatments for bipolar disorder.

They searched from 1993 onwards on Cochrane, Medline, Embase and ClinicalTrials.gov for placebo-controlled or active comparator bipolar maintenance clinical trials of ⩾6 months’ duration with at least 15 patients in the treatment group. The main outcome measure they were interested in was the relative risk of relapse for patients in remission. They found 20 trials (including a total of 5364 patients) and discovered that lithium and quetiapine were the most studied agents (eight and five trials, respectively). The majority of studies included patients who had previously responded to treatment for an acute episode.

Available maintenance therapies show considerable variation in efficacy. The efficacy of lithium and divalproex has been confirmed, but newer therapies, such as a number of atypical antipsychotics were also shown to be effective in bipolar disorder. Efficacy of all maintenance interventions needs to be balanced against the safety and tolerability profiles of individual agents.

Last reply was August 21, 2011
Try out our members features!