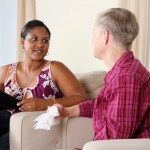 A report into the care received by patients with anxiety and depression across more than 350 NHS-funded psychological therapy services in England and Wales has revealed good overall standards of care, but substantial variation in quality.

The National Audit of Psychological Therapies (NAPT), commissioned by the Healthcare Quality Improvement Partnership (HQIP) and carried out by the Royal College of Psychiatrists’ Centre for Quality Improvement, collected data from 357 services and over 10,000 people in therapy for anxiety and depression. The audit measured ten standards, including patient satisfaction, effectiveness of therapy, waiting times and number of treatment sessions offered.

However, not all services routinely measure how well patients were before and after therapy, so it is not yet possible to draw firm conclusions about how effective all the services in England and Wales are. 15% of the services that submitted data for the retrospective audit did not have any patients with a pre and post score for at least one outcome measure.

The audit report urges all psychological therapy services to routinely collect information about what response people make to the treatment they are given.

The audit found that services are generally good at providing evidence-based psychological treatments recommend by the National Institute of Health and Clinical Excellence (NICE). Some 83% of patients with a diagnosis for which there is a NICE guideline were given the recommended therapy for their condition. However, not all services record the diagnosis of their patients, making it difficult to know whether or not the care they are providing is appropriate for their patients.

Many services, particularly larger ones, are effective at ensuring that patients are seen quickly once referred. However, this standard was not met by all services, with one in seven people in the audit waiting more than three months for their first appointment. Waiting times are important; patient feedback indicates that long waits can have a negative impact on a person’s mental health.

The audit findings suggest that older people are less likely to access psychological therapy compared to working age adults, and this is a finding that needs exploring further. In terms of ethnicity, no particular groups appear to be over or underrepresented at the national level.

Overall, the findings reveal that psychological therapy services are meeting a high number of standards, but support is needed to help some services improve. Services that currently fall below the audit standards are being supported to make positive changes through action planning resources. A re-audit will then take place to see what improvements have occurred.

Professor Mike Crawford, Director of the Centre for Quality Improvement and Lead for the National Audit of Psychological Therapies said:

We know that people with anxiety and depression highly value being able to access good quality psychological therapy in a reasonable timescale, and this is exactly what many patients are experiencing. However, the variation between services means that there remains plenty of room for improvement. These findings will help individual NHS services see where they can improve and provide even better treatment in the future.

Last reply was December 4, 2011
Try out our members features!