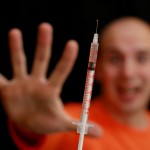 In 1998 a very small study was published, involving just 3 children with autism, who were treated with a hormone called secretin that controls digestion.

Here’s the abstract of the study by Horvath et al:

We report three children with autistic spectrum disorders who underwent upper gastrointestinal endoscopy and intravenous administration of secretin to stimulate pancreaticobiliary secretion. All three had an increased pancreaticobiliary secretory response when compared with nonautistic patients (7.5 to 10 mL/min versus 1 to 2 mL/min). Within 5 weeks of the secretin infusion, a significant amelioration of the children’s gastroinstestinal symptoms was observed, as was a dramatic improvement in their behavior, manifested by improved eye contact, alertness, and expansion of expressive language. These clinical observations suggest an association between gastrointestinal and brain function in patients with autistic behavior.

This article generated some press interested at the time and as a result a number of parents of children with autism contacted their doctors to ask about the treatment.

A Cochrane systematic review was published on this topic in 2005 and this review has now been updated to include 16 randomised controlled trials that explore whether intravenous secretin improves the core features of autism spectrum disorders.

Not only does this review show that secretin is not an effective treatment for autism spectrum disorders, it also stresses that further research of this treatment for this group of patients cannot be justified.

The findings show that the quality of the research in this area is extremely poor:

There is no evidence that single or multiple dose intravenous secretin is effective and as such currently it should not be recommended or administered as a treatment for ASD (autism spectrum disorders).

Further experimental assessment of secretin’s effectiveness for ASD can only be justified if there is new high-quality and replicated scientific evidence that either finds that secretin has a role in neurotransmission in a way that could benefit all children with ASD or identifies important subgroups of children with ASD who could benefit from secretin because of a proven link between the action of secretin and the known cause of their ASD, or the type of problems they are experiencing.