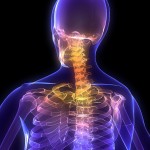 Temporomandibular disorders (TMDs) can affect the temporomandibular joint (TMJ) the muscles of mastication or both. A range of factors have been related to TMDs , occlusion, trauma, deep pain stimulus, parafunctional activities and psychological factors, such as anxiety, depression and stress . It has also been suggested that postural problems related to the head and cervical spine may cause TMDs.  The aim of this review was to assess the evidence for an association between head and cervical posture and TMDs.

Searches were conducted in the Medline, PubMed, Embase, LILACS and ISI Web of Science databases. Studies that included individuals with TMD diagnosis (joint pain/arthralgia, muscular pain/limitation or both) and evaluated the association between head and cervical spine posture and TMDs were eligible. Study selection was carried out independently by two reviewers, with quality being assessed using a specifically developed questionnaire of six items with studies being rated as weak (1–2), moderate (3–4) or strong (5–6).

The evidence presented in this systematic review shows that the relationship between TMDs and the head and neck posture is still controversial and unclear. The insufficient number of articles considered of excellent methodological quality is a factor that hinders the acceptance or denial of this association.

From the table showing methodological quality it would suggest that six of the included studies were randomised although this is not clear from the text of the review what the actual study designs were. Of these six studies, three were given the authors maximum score for quality with two of them finding a positive association and one a negative association.   The qualitative summary highlights important methodological issues in a many of the studies that were included so the conclusion that the relationship between TMDs and the head and neck posture is unclear seems justified.