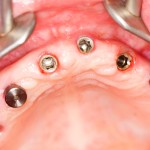 This review by Menini et al aimed to evaluate the prognosis of immediately loaded full-arch prostheses supported by both upright and tilted implants in the maxillae, after at least 1 yr. of function.

The authors searched the PubMed, Cochrane Central Register of Controlled Trials (CENTRAL), and EMBASE databases for human studies that included participants of any age having immediately loaded rehabilitation of the edentulous maxilla supported by both upright and tilted implants. The studies had to have a minimum of 10 patients, follow up of at least 12 months with the loading being applied within 48hrs of surgery. Studies needed to provide sufficient information to allow survival data to be calculated.  Screening and data extraction was conducted independently and in duplicate.

This review only reports on short term outcomes a fact noted by the authors.  As it considers full arch rehabilitation it also raises issues about the way in which the analysis is conducted as we are talking about the placement of several implants supporting dentures and as a consequence they are not independant of each other and so some account of clustering should be taken into account.  The meta-analysis also combines both pro- and retrospective study designs and it may have been useful to analyse these separately as well all together.

This meta-analysis included a few more studies than an earlier review conducted by Del Fabbro but considering the increasing number of implants that are placed on a daily basis it is a sad fact that few high quality randomised controlled trials have been conducted in order to inform both patients and practitioners. This is evidenced by the fact that the systematic reviews that have been conducted by the Cochrane Collaboration ( Esposito et al ) have only been able to find small numbers of trials of variable quality to answer their questions.