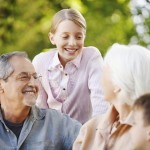 Yesterday we looked at the reported periodontal outcomes from a multicenter trial that compared the outcomes for two different treatment options for the shortened dental arch. Today we are considering the report of the oral health quality of life outcomes (OHRQoL).

As outlined previously patients were randomised into two groups; a partial removable dental prosthesis (PRDP) group to replace missing molars and a shortened dental arch (SDA) group with no molar replacement. OHIP-49 was used to measure OHRQoL with data being collected before treatment (pretreatment); 6 weeks (baseline), 6 months, and 12 months (1 year) after the study intervention; and thereafter annually until 5 years.

Both treatments show a significant improvement in OHRQoL, which continued in the RPDP group until the 1-year follow-up. No significant differences were seen between groups.

We have highlighted other findings from this interesting study previously (Dental Elf 12th May 2014 & 5th July 2012) and with increased interest in patient reported outcomes it is good to see these published. The authors raise the issue of the sample size as the original power sample suggested at 80 patients per group were required. The authors also highlight the heterogeneity of the dental treatments require both in terms of extend and complexity.