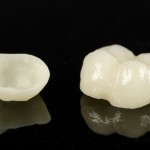 Improvements in dental ceramic materials in the past decade has led to the increasing use of all ceramic crowns on posterior teeth. The aim of this study was to evaluate the clinical fracture incidence of tooth-supported all-ceramic crowns according to restored tooth type.

The authors searched the Medline/PubMed, Embase, the Cochrane Library, the Chinese Biomedical Literature Database, and the China National Knowledge Infrastructure. They also searched recent issues of 11 dental journals and the bibliographies of identified articles.  Title and abstracts were independently screened by two reviewers with Clinical randomized controlled trials (RCTs), prospective cohort studies and and retrospective studies being included.  Studies with mean follow-up periods of less than 36 months were excluded. Fractures were classified as veneer fractures or core fractures)

Within the limitations of this study’s protocol, the current evidence was interpreted to suggest that dental ceramic materials demonstrated acceptable 5-year core and veneer fracture incidences when used for tooth-supported single crowns in both anterior and posterior segments. A higher fracture rate for posterior crowns was the clear trend for single crowns, and molar crowns showed a significantly higher fracture rate than premolar crowns.