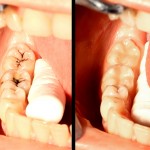 Dental amalgam has been the filing material for choice for more than 150 years. However, because of their aesthetics and concern over their mercury content their use has been declining. The Minamata Convention on Mercury has also proposed that their use be phased down according to local needs. The development of tooth-coloured resin composites from their initial use in anterior teeth to amalgam substitutes in stress-bearing posterior restorations provides a clear alternative. However, there are concerns as to whether their longevity is comparable to amalgam. The aim of this review was to assess the long-term survival of posterior resin composite restorations using individual patient data from long-term follow-up studies of at least 5 years duration.

Searches were conducted on the Cochrane Library, PubMed, the Web of Science (ISI), and Scopus for English language studies. Longitudinal studies of direct class II or classes I and II restorations in permanent dentition of at least 5 years duration, a minimum of 20 restorations at final recall and the original datasets available were considered. Study selections and appraisal was carried out independently by two reviewers.

The conclusion of the present meta-analysis of 12 clinical studies based on raw data is that caries risk and number of restored surfaces play a significant role in restoration survival, and that, on average, posterior resin composite restorations show a good survival, with annual failure rates of 1.8% at 5 years and 2.4% after 10 years of service.

The authors note that 10 out of the 12 included studies were conducted by the same research group, which could lead to a possible bias. Two of the largest studies contributing to the analysis were retrospective so a second analysis was carried out excluding these interestingly this resulted in a marked change in the Hazard ratio for caries risk for both premolars and molar from 2.44(95% CI 1.62, 3.68 ) and 3.55(95%CI- 2.21, 4.17) for all studies to 1.96 (95% CI 1.23, 3.12 and 1.73 (95% CI 1.06, 2.81) for prospective studies only. While this study looks at survival rates of composite resins only the Cochrane review by Rasines Alcaraz et al pubished earlier this year ( Dental Elf -7th april 2014) compared resins with amalgam concluding:-

There is low-quality evidence to suggest that resin composites lead to higher failure rates and risk of secondary caries than amalgam restorations. This review reinforces the benefit of amalgam restorations and the results are particularly useful in parts of the world where amalgam is still the material of choice to restore posterior teeth with proximal caries. The review found insufficient evidence to support or refute any adverse effects associated with amalgam or composite restorations. However, emerging research is highlighting issues around genetic susceptibility to mercury. The decision for a global phase-down of amalgam (Minamata Convention on Mercury) will restrict the future use of amalgam