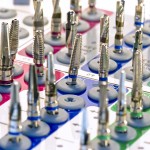 Dental Implants now in regular use in dental practice. However they come in an almost bewildering array of sizes and materials and with a range of surface characteristics and modifications. Many of these modifications have been developed with the aim of improving clinical performance. This update of a Cochrane review which was last refreshed in 2007 aimed to compare the clinical effects of different root-formed osseointegrated dental implant types for replacing missing teeth for the following specific comparisons:-

Standard Cochrane methodological approaches were followed with searches of the Cochrane Oral Health Group’s Trials Register, the Cochrane Central Register of Controlled Trials (CENTRAL) Medline and Embase without restrictions. Randomised control trials (parallel group or split mouth) with follow up of at least one year after functional loading were considered.

Based on the results of the included RCTs, we found no evidence showing that any particular type of dental implant had superior long- term success. There was limited evidence showing that implants with relatively smooth (turned) surfaces were less prone to lose bone due to chronic infection (peri-implantitis) than implants with much rougher surfaces (titanium-plasma-sprayed). These findings were based on several RCTs, often at high risk of bias, with few participants and relatively short follow-up periods.

Since the last version of this review the number of RCTs able to be included has increased from 16 to 27 although the authors highlight the fact that 81 potential RCTs were identified but a range of potential issues meant that they could not be included. They also note that 58% of the 27 included were funded by implant manufacturers, which is a potential source of bias.