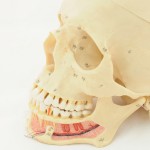 While the use of dental implants has increased in cases where there is a limited mandibular height the options are, short implants, bone grafting and inferior alveolar nerve (IAN) repositioning. IAN repositioning is performed via one of two surgical techniques, lateralisation or transposition, with lateralisation yielding lower degrees of nerve deficiency. The aim of this review was to identify the complications associated with IAN repositioning.

The high level of bias associated with the literature included in this review and the increasing number of posterior mandible atrophy cases worldwide, show the necessity of greater data consolidation to determine scientifically if and when the IAN repositioning technique can be recommended,

The growing use of dental implants for the rehabilitation of edentulous jaws is leading to greater exploration of their use with increasing use of procedures such as sinus lifts, bone graft and IAN repositioning to enable use of the standard length implant. As shown by this review which has focused on what for some will be the most obvious complication of nerve repositioning, that of neurosensory deficit. Other issues such as whether the technique recovers the alveolar ridge anatomy, or increases fractures are not addressed by the included studies although mentioned in the discussion. Whether this type of more heroic procedure to enable standard implants becomes a more common procedure should depend on more information on the complications from larger and better conducted studies.