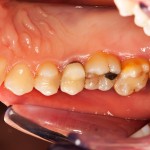 The placement of prosthetic restoration finish line is the subject of much interest and debate. The aim of this review was to assess the effect of prosthetic margin placement on caries susceptibility of abutment teeth

This systematic review and meta-analysis failed to detect a significantly different secondary caries rate of sub-gingivally located prosthetic margins in the short to mid-term (≤10 years). Due to the small number and the limitations of the included studies the results do not provide conclusive evidence as to the effect of prosthetic margin placement on the incidence of secondary caries.

The question addressed by this review is one that would be clinically useful to answer. The qualitative summary provides some information about secondary caries at prosthetic margins. However, the available evidence is limited by the studies designs and the heterogeneity of the original studies. While a meta-analysis using data from two studies after follow up of 5 years was reported it is of limited value bearing in mind that the GRADE summary of findings rates the quality of evidence as very low.  Several databases were searched but only studies in English or with English abstracts were considered which could have a significant impact on the findings, bearing in mind the poor quality of the studies that have been included.