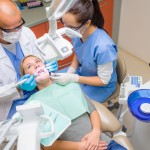 Recent years have seen an increase in the prevalence of non-carious cervical lesions (NCCLs). As they are more common in older patients further increase are likely. Several alternatives to improve the bonding of restorations have been suggested and conditioning with ethylene diamine tetra acetic acid (EDTA) has been reported in vitro. The aim of this trial was to evaluate the influence of preliminary EDTA conditioning on the retention of composite restorations in NCCLs bonded with a one-step self-etch adhesive over the course of 18 months.

Patients with two similar-sized NCCL were selected and randomly allocated to one of two groups. 2 calibrated dentists placed the resin composite restorations using a one-step self-etch adhesive after preliminary cleaning with pumice and water. Half of the restorations were placed according to the manufacturer’s instructions. The other half has the lesion surface conditioned with 17% EDTA for 2min before adhesive application. Restorations were evaluated at baseline, 6, 12, and 18 months using FDI criteria by independent examiners blind to the allocation. Retention rate was the primary outcome, marginal adaptation and staining secondary outcomes.

The preliminary conditioning with EDTA before application of a one-step self-etch adhesive significantly improved the retention rates of composite restorations in cervical lesions.