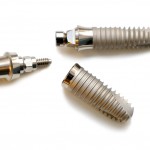 Dental implants were first introduced in the 1970s and they are now becoming part of day-to-day dental practice, but how long are they expected to survive?

The aim of this review was to evaluate the survival and success rates of osseointegrated implants in studies with  a follow-up of at least 10 years.

Searches were conducted in the PubMed/Medline and the Cochrane Central Register of Controlled Trials (CENTRAL) databases. Two reviewers independently selected studies. A scoring system was used to assess study quality. Randomised controlled trials (RCTs), prospective or retrospective cohort studies evaluating the survival or success rate and level of marginal bone resorption around osseointegrated implants with a minimum follow-up of 10 years were considered.

the analysis of the studies included in this review, with a follow- up period of up to 20 years, demonstrated high survival rates (cumulative mean 94.6%, SD 5.97%). Approximately 70% of the implant losses occurred after placement of the abutment and prosthetic loading, thereby demonstrating that a higher number of failures occur after implants are in function.

Only two major databases were searched for this review and only English language articles were considered so it is possible that some relevant studies could have been missed. While the studies have been assessed for quality a scoring system has been used and this type of approach is not recommended. The authors have included retrospective studies and these are potentially at greater risk of bias than prospective studies and RCTs. As there are 14 prospective studies and RCTs available the review could have been restricted to those study designs.   The authors did not undertake a meta-analysis due to variation is success criteria used in the included studies although they did provide an overall average survival rate o 94.6% with a range of 73.4%- 100%. The lowest figure coming from the study with the longest follow up period.