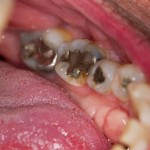 Dental amalgam and composite resin restorations are the most commonly used materials for restoring permanent molar and premolar teeth. Although amalgam is a cost -effective material and has been used for over 150 years its use is decreasing because concerns about their aesthetics and mercury content. The Minamata Convention on Mercury has proposed that the use of dental mercury be phased down and this has been ratified by 127 governments worldwide.

The aim of this Cochrane review update was to examine the efficacy and safety of direct composite fillings versus amalgam fillings.

This review supports the utility of amalgam restorations, and the results may be particularly useful in parts of the world where amalgam is still the material of choice to restore posterior teeth with proximal caries. Of note, however, is that composite resin materials have undergone important improvements in the years since the trials informing the primary analyses for this review were conducted. The global phase‐down of dental amalgam via the Minamata Convention on Mercury is an important consideration when deciding between amalgam and composite resin dental materials. The choice of which dental material to use will depend on shared decision‐making between dental providers and patients in the clinic setting, and local directives and protocols.

This Cochrane review is an update of an earlier review published in 2014 (Dental Elf – 7th Apr 2014) with the collaboration of the Canadian Agency for Drugs and Technologies in Health (CADTH). and included one additional trial.  As the author’s point out all the included trials were conducted more than 10 years ago and dental materials are constantly evolving so the review may not reflect currently available materials.  The review does suggest higher failure rates with composite restorations, so more research is needed to demonstrate long term effectiveness and safety of the latest generation of non-mercury based alternative restorative materials.  However as caries is preventable greater emphasis on preventative and  minimal restorative approaches will also be important as we move away from mercury based materials.

Canadian Agency for Drugs and Technologies in Health (CADTH). Composite Resin Versus Amalgam for Dental Restorations: Clinical Effectiveness and Safety