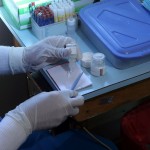 Non-carious cervical lesions (NCCLs) are characterised by saucer or wedge-shaped defects that appear at the cementum-enamel junction as a result of gradual loss of dental tissues in the absence of caries. With an ageing population their prevalence is set to increase and their restoration represents a challenge. It has been suggested that enamel beveling improves retention but this is disputed. The aim of this review was to assess whether enamel bevelling compared to no enamel bevelling improves the retention of composite restorations in NCCLs.

Randomised clinical trials (RCTs) that compared the retention rates restorations in NCCLs placed with or without bevel with at least 1-year follow-up were considered. Study selection was carried out by two reviewers who also assess study quality using the Cochrane risk of bias tool.

2 studies were considered to have a high risk of bias and were not included in the meta-analysis.

Risk differences for retention rate and marginal discolouration form the meta-analysis are shown in the table below.

No superiority of bevelled restorations was observed in the short-term follow-up of 1-year, although this conclusion was based on only two RCTs. There is not enough evidence to support the bevelled technique over non-bevelled for NCCLs over longer periods of time. Better standardization and reporting of RCTs of enamel bevelling are necessary in longer-term follow-ups.

A very broad search was undertaken for this review on only a small number of trials of more that 12 months duration were identified, with the longest being 3 years. The studies were also relatively small and employed a split mouth design with multiple restorations in participants, which raises the issue of cluster effects that are not mentioned in the review.

Previous reviews of NCCLs (see links) have suggested that glass ionomers restorations had lower failure rates and also that there is insufficient evidence for recommending the best adhesive or bonding strategy for NCCLs. The common theme in all 3 reviews is the limited quality of evidence to inform clinical decision making about this topic.