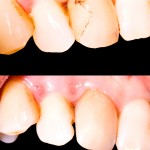 Although composite resin restorations are increasingly being placed in posterior teeth because of their superior aesthetic appearance, they have been used for the repair and restoration of anterior teeth for decades.

The aim of this review was to assess the longevity of anterior composite restorations.

Searches were conducted in the Medline/PubMed, SciVerse Scopus, and Cochrane Central Register of Controlled Trials databases without restriction of date or language. Longitudinal prospective or retrospective clinical trials that evaluated the clinical survival of direct restorations in anterior permanent teeth placed with visible light-cured composite resin were considered. Studies were required to have a minimum follow up of 3 years.

Two reviewers independently screened the studies and abstracted data. There was a high degree of heterogeneity amongst the studies regarding study design, methods, and outcomes. Meta-analysis was not conducted but annual failure rates (AFRs) were calculated for each study.

Findings of the present review generally indicate a good clinical performance in the long-term (follow-up 3+ years) for anterior composite resin restorations, with annual failure rates varying from 0 to 4.1%. It seems that failure behavior in anterior restorations is different from posterior teeth, with less secondary caries present and more restorations being replaced for other reasons such as aesthetic appearance. However, there is still room for well-designed clinical trials to evaluate the longevity of anterior composite restorations and investigate the specific factors associated with failure.

While the authors have searched a wide range of databases they chose to include both pro- and retrospective studies. Unfortunately, although the majority were reported to be prospective, it is not clear how many of them were. In addition there is not indication that the quality of the studies were assessed. The authors indicate that the most reported cause of restoration failure in the included studies was fracture of the tooth or restoration.

However, they highlight that in all studies the restoration was the unit of analysis and as patients may have more than one restoration patient factors could influence the findings. While this can be taken into account by designing the studies to account for this clustering effect this is rarely undertaken. In addition while the USPHS criteria were used for a majority of the included studies modified versions were often used which could impact upon comparability. The authors also note that most of the studies were conducted in a secondary care environment so the generalisability of the findings to routine practice needs to be considered.