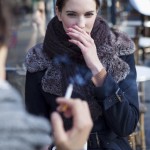 The strong association between smoking and periodontal disease is known (Dental Elf 20th June 2014). However as non-smoking individuals exposed to environmental tobacco smoke (passive or second- hand smoking) are also know to be at risk of disease this review aimed to assess the association between environmental tobacco smoke (ETS) and periodontal disease.

Searches were conducted the Medline and Google scholar databases and reference lists of identified studies also searched.   Clinical and laboratory based investigations that considered clinical periodontal parameters and biomarkers in saliva and gingival cervicular fluid (GCF) of individuals exposed to ETS and controls (non-smokers unexposed to ETS) were included. Only English language studies were considered.

The association between ETS and periodontal disease remains debatable and requires further investigations.

This review was restricted to only two databases and English language studies so it likely that some studies could have been missed. It is not clear whether the study selection and data abstraction was conducted independently and no quality assessment of the included studies has been reported.