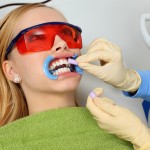 With an increasing focus on aesthetics the popularity of cosmetic tooth whitening has increased. It has been categorised as in-office (professionally ad- ministered), an at-home (professionally dispensed) or an over-the- counter (self-administered) procedure that uses products based on hydrogen peroxide (HP) or carbamide peroxide.  While a theoretical advantage of using a light source to improve whitening exists because of its ability to heat HP to increase the decomposition rate in free radicles to oxidise complex organic molecules, this has been questioned.

The aim of this review was to assess whether there are any differences in the bleaching efficacy and TS of bleaching protocols performed with and without light using low and high HP concentrations.

Parallel and split-mouth randomised controlled trials (RCTs) comparing in-office dental bleaching with and without light in adult patients of any age group were considered.  Three reviewers independently selected studies, abstracted data and assessed risk of bias using the Cochrane Tool. The quality of the evidence was rated using the GRADE approach.  Random effects meta-analysis was conducted with a subgroup analysis (low and high hydrogen peroxide concentration) for colour change measured by spectrophotometer (ΔE*) or shade guide units (ΔSGU) as well as the risk and intensity of TS.

Neither the efficacy nor the risk of tooth sensitivity of in-office bleaching was influenced by the use of light, regardless of the hydrogen peroxide concentration. However, this should be interpreted with caution, as it represents an overall comparison without considering variations in the protocols (number of bleaching sessions, product, and kind of the light) of the bleaching techniques in the studies included

This review adopted a sound methodological approach and employed an extensive database search identifying 21 RCTs in total. Looking at the risk of bias assessment (RoB) table only 5 studies were at low risk of bias and the authors highlight the fact that randomisation was poorly executed or reported. The authors report that only 2 RCTs were at high risk of bias although the RoB table identifies 5 studies with at least one criteria at high risk.

While the authors have essentially undertaken 4 main comparison bleaching v bleaching using light, and high v low concentration HP there authors not considerable variation in the bleaching and activation protocols and the types of light source used. However, the overall number of studies is relatively small and the number of individual comparisons of different combination is likely to be smaller still. It is worth noting that this group of authors are developing a network meta-analysis which may address some of these issues.We covered an earlier review by He et al ( Dental Elf – 2nd May 2012) that included a smaller number of  studies which also suggested that use of a light source did not improve the bleaching effect but increase tooth sensitivity while this review suggests no difference.

Last reply was December 28, 2018
Try out our members features!