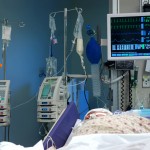 Aspiration of oropharyngeal organisms is an important mechanism for the development of ventilator associated pneumonia (VAP). VAP may affects between 10-30% of patients receiving mechanical ventilation. The aim of this review was to assess the effects of oral care with antiseptics on the prevalence of VAP and other clinical outcomes in critically ill patients undergoing mechanical ventilation.

this meta-analysis suggests that oral care with antiseptics significantly reduces the prevalence of VAP, especially in cardiac surgery patients, but does not have effect on other important clinical outcomes, such as ICU mortality, length of ICU stay, duration of mechanical ventilation.

The authors have conducted a broad database search and identified 17 RCTs for inclusion in their review. This topic was addressed by the Cochrane Oral Health group review in 2013 (Dental Elf -19th Aug 2013). The Cochrane review included 35 studies with similar findings ie:-

Oral Health care that includes either chlorhexidine mouthwash or gel is associated with a 40% reduction in the odds of developing ventilator-associated pneumonia in critically ill adults. However, there is no evidence of a difference in the outcomes of mortality, duration of mechanical ventilation or duration of ICU stay.

The difference in the number of included studies is probably related to the decision to exclude studies with a sample size of less than 50. The authors in this new review chose to assess study quality using the Jadad scale with all but two of the studies scoring ≥ 3 and being considered of high quality. Use of scales such as the Jadad scale are no longer recommended with many authors now using the Cochrane risk of bias tool.