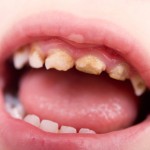 According the World Health Organization a preterm birth is when a live birth occurs before 37 weeks of pregnancy.   A range of developmental enamel defects (enamel hypoplasia, enamel opacity, and molar incisor hypomineralisation [MIH]) affecting both the primary and permanent dentitions have been reported in association with preterm birth.

The aim of this review was to better define the possible association between preterm birth and developmental defects of enamel (DDE).

Searches were conducted in the PubMed, Scopus, Web of Science and Cochrane Library databases. Longitudinal studies, cross-sectional studies, case-control studies or cohort studies. reporting the prevalence of DDE in both preterm and full-term children and published in English were considered.  Two reviewers independently extracted data. The Newcastle-Ottawa Scale (NOS) was used to assess risk of bias. Quantitative variables were converted into odds ratios (OR) and associations between preterm birth and DDE was described using OR and 95% confidence intervals (CI).

The results of this meta-analysis showed a three times increased risk of developing DDE in preterm children.

The authors have searched a good range of databases although restricting their inclusions to English language may have excluded some relevant studies.  In an earlier blog (Dental Elf – 20th Feb 2014) we reported on another review of this topic which included a wider range of languages. That review included 23 studies of which only 7 are common to both reviews. While the authors indicate that 13,109 children were included in the studies, they go on to state that there were 1,737 preterm children and 8,570 full term children, a total of 10,307. Apart from the 5 studies considered to be at high risk the remaining studies scored well on the NOS. There is some variation in the indexes used to measure the enamel defects and it can be difficult to calibrate examiners in their use. The authors also highlight the wide variation in age range of the patients examined ranging from 1.5 – 18 years and both of these factors will have contributed to study heterogeneity. While the results have been reported as odds ratios reporting the findings as relative risks is likely to have shown smaller differences between preterm and full-term children.

Developmental defects of enamel and caries in primary dentition