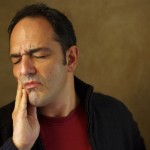 A 2010 Cochrane review (Cepeda et al) found that there was less pain associated with pain on injection and augmented patient comfort and satisfaction with the use of buffered lidocaine compared with unbuffered lidocaine in both parallel and crossover trials. Although none of the 23 trials included in the review were dental.  The aim of this trial was to compare the pain of infiltration and pain of an incision and drainage procedure of a buffered versus a unbuffered 2% lidocaine with 1:100,000 epinephrine solution in symptomatic patients with a diagnosis of pulpal necrosis and associated acute swelling.

Patients over the age of 18 with a pulpal diagnosis of total necrosis, radiographic evidence of a periapical area, and associated facial swelling were randomised to receive either 2 infiltrations of 2% lidocaine with 1:100,000 epinephrine or 2 infiltrations of 2% lidocaine with 1:100,000 epinephrine buffered with 8.4% sodium bicarbonate.  After a 20% benzocaine topical anaesthetic the patients received 2 local anesthetic infiltrations, one on each side of their swelling. The patients were instructed to rate their pain of the 3 phases of infiltration—needle insertion, placement, and solution deposition—on 3 separate visual analog scales (VASs) for each mesial and distal injection. Both the primary investigator and the study patients were blinded as to which anaesthetic they would receive.

The addition of a sodium bicarbonate buffer to 2% lidocaine with 1:100,000 epinephrine did not result in significantly decreased pain of infiltrations or significantly decreased pain of the incision and drainage procedure when compared with 2% lidocaine with 1:100,000 epinephrine in symptomatic patients with a diagnosis of pulpal necrosis and associated acute swelling.

The study has been well conducted with the anaesthetic technique well described. However, no power calculation was provided and the study is not large so it possible that it may not have been large enough to show a difference if one existed.

Last reply was November 20, 2014
Try out our members features!