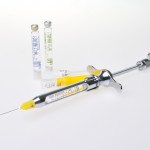 Lidocaine one of the most commonly used local anaesthetics tends to have a low pH range. It has been suggested that buffering (alkalinisation) may reduce pain and some but not all studies has supported this.

Patients over the age of 18 with mandibular molars with symptomatic irreversible pulpitis were eligible for inclusion. Each patient rated his or her initial pain on a Heft-Parker visual analog scale (HP-VAS) and were randomised to receive 2 cartridges of either 2% lidocaine with 1:80,000 epinephrine buffered with 0.18 mL 8.4% sodium bicarbonate or 2% lidocaine with 1:80,000 epinephrine with 0.18 mL sterile distilled water using conventional IAN block injections.

buffering the 2% lidocaine containing 1:80,000 epinephrine with 8.4% sodium bicarbonate did not improve the success of the IAN block in mandibular molars in patients with symptomatic irreversible pulpitis.

Only the overall success rate is reported. This trial was designed with the power to detect a 30-percentage point difference in anaesthetic success between the two groups so although the success rate was higher in the buffered anaesthetic group this was not significant. This finding is similar to the findings of another similar sized trial we reported last year (Dental Elf 7th Nov 2013).  However  a 2010 Cochrane review that included 23 studies (none of which were dental)  found that:-

increasing the pH of lidocaine decreased pain on injection and augmented patient comfort and satisfaction.