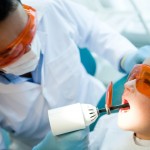 High quality reviews (Ahovuo-Saloranta  et al) have confirmed the effectiveness of fissure sealants to prevent caries in occlusal surfaces and there is increasing interest in the use of sealants on smooth surfaces.  The aim of the review was to assess the effectiveness of sealing non-cavitated proximal caries lesions in primary and permanent teeth.

Searches were conducted in PubMed, Scopus, ISI Web of Science, Cochrane Library, Lilacs, SIGLE (System of Information on Grey Literature in Europe) and clinicaltrials.gov. Randomised-controlled trials (RCTs), and controlled clinical trials (CCTs) with at least 12 months of follow-up that compared of sealing non-cavitated proximal caries lesions in in primary and permanent teeth with different material/ technique or placebo.

sealing non-cavitated proximal caries lesions, both in primary and permanent teeth, seems to be effective in controlling caries progression in the short and medium term. Further long-term randomized controlled trials should be approached to increase this evidence.

Nine of the 10 included studies were of split mouth design. While split mouth studies have some advantages as the patient can serve as their own control there are important limitations and statistical considerations that need to be borne in mind (Lesaffre et al). The number of patients included in the meta-analysis is small which should be taken into consideration when assessing the overall result. In addition the majority of studies only reported outcomes at 12 months. As the authors note more higher quality RCTs of longer duration are needed before the effectiveness of this intervention can be confirmed.