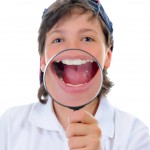 There has been a lot of interest in how to best manage deep carious lesions to maintain pulp vitality. Different approaches have included the partial removal of caries only, stepwise removal and full removal. In the stepwise approach, caries is partially removed and the remainder sealed in for a period of 1-6 months. The lesion is supposed to become inactive in this time and tertiary dentine laid down allowing removal of the remaining caries in due course.

This multi-centre randomised controlled trial sought to compare the effectiveness of this approach with simple partial caries removal and permanent restoration (i.e. there would be no re-entry). Patients were eligible for the trial if:

The retention of carious dentine does not adversely affect pulp vitality.

This appears to be a well conducted pragmatic trial. The recent Cochrane review by Ricketts et al on deep caries management found moderate quality (GRADE criteria) evidence to suggest that partial caries removal had a relative risk of pulpal exposure of 0.23 compared to full caries removal but low or very low quality evidence regarding signs and symptoms of pulpal disease 1 year later and difference in the failure of the restoration. The review did not report on any studies comparing partial to stepwise caries removal.