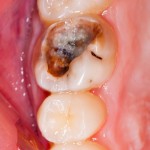 The traditional approach to caries management was to undertake caries removal until only hard dry dentine remained. However, evidence suggests that this is no longer necessary or desirable as long as the restoration provides a sufficient seal.

The aim of this review was to compare the effects of different caries excavation strategies on outcomes.

Searches were conducted in the PubMed, Embase, Cochrane Central Register of Controlled Trials, opengrey and clinicaltrails.gov databases. Two reviewers independently selected studies, and risk of bias was assessed according to Cochrane guidelines. Randomised or non-randomised clinical controlled trials evaluating the excavation of cavitated, natural primary or secondary caries lesions in primary or secondary teeth were considered.

Outcomes compared were; risk of complications, patient reported pain or discomfort, time required, the number of remaining bacteria in the dentine at the  cavity floor or in proximity to the pulp  .

The unit of analysis was the excavated lesion or lesion site with no adjustment for clustering. Network meta-analysis was performed using Bayesian random-effects models and a Markov Chain Monte Carlo simulation.

within the limitations of this study and the supporting evidence, not attempting to remove all softened or stainable dentine could reduce the risk of complications. Chemo-mechanical removal seems advantageous with regards to pain, but is time consuming, and was not found beneficial with regards to clinical outcomes. Data regarding other self-limiting excavation methods was insufficient for definitive conclusions. Excavation criteria should be validated against clinically relevant outcomes, not surrogates with limited meaningfulness.

One of the advantages of undertaking network meta-analysis is that it allows indirect comparison of studies. So for example is there id have 4 treatments A, B, C, D and only A and B and C and D have been directly compared in studies, it allows you to undertake comparisons between and C and A and D for example.   However, as the authors highlight the overall quality of the availability studies is low and in addition the unit of analysis is the lesion and no allowances for clustering have been made which artificially inflates the sample size. In addition to poor quality the number of available studies is small so the some caution needs to be taken in interpreting the findings. Although, other reviews provide support for the incomplete removal of caries approach ( Dental Elf – 11th Feb 2012).