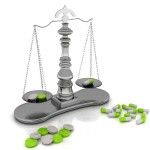 There’s an interesting review in the British Journal of Psychiatry this week, which compares the effectiveness of psychiatric drugs with those used to treat physical health problems. The headline from the review is that ‘psychiatric drugs are as effective as other drugs’.

Professor Stefan Leucht who led the review team claims that:

There is a deep mistrust of psychiatry, fostered by reports suggesting that the efficacy of psychiatric drugs is very small. Psychiatrists, patients, carers and the media are often unsettled by these findings, and some may think that psychiatric medication is not worth the bother.

Taking all diseases, the mean effect sizes were only of medium size for both psychiatric and general medicine drugs.

There are reasons why people should be critical about psychiatric drug treatment, such as a lack of diagnostic tests, commercial conflict of interest, unclear mechanism of drug action and side-effects. But our study shows that the psychiatric drugs were not generally inferior to those used in other medical specialties, and the effectiveness of psychiatric drugs is supported by randomised controlled trials.

Any comparison of different outcomes in different diseases can only serve the purpose of a qualitative perspective. The increment of improvement by drug over placebo must be viewed in the context of the disease’s seriousness, suffering induced, natural course, duration, outcomes, adverse events and societal values.