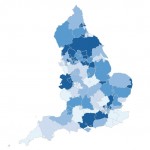 The second issue of the NHS Atlas of Variation in Healthcare has been published by the Department of Health as part of the QIPP (Quality, Innovation, Productivity and Prevention) programme. The aim of the Atlas is to reduce unwarranted variation in healthcare, increase value for money and improve quality of care.

The idea behind this publication is that commissioners should use it to identify any variations in their local area and take actions to reduce unwarranted variation within their locality, or between their locality and other areas of the country.

The maps in the atlas are not intended to be used as targets or performance tables but rather to highlight variation and support local discussion and decisions, and to help commissioners learn from each other.

Commissioners should consider the appropriateness of services and investigate when clinical health outcomes are not reflecting the financial investment that has been made.

A mental health atlas may be produced at some point in the future, but for the time being there are a few indicators that relate to mental health:

One of the variations highlighted by the 2011 issue of the atlas is the 25-fold variation in anti-dementia drugs prescribing rates across England, with Sheffield PCT prescribing the most and Torbay PCT the least.

Last reply was July 6, 2014
Try out our members features!