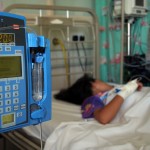 Intensive care patients are at risk of developing anxiety, depression and post traumatic stress disorder (PTSD) during their recovery. One study shows that 10% of patients who spend more than 48 hours in intensive care will go on to be diagnosed with PTSD (ref 2).

This randomised controlled trial conducted by a collaborative team of researchers from 6 European countries, set out to evaluate whether a prospectively collected diary of a patient’s intensive care unit (ICU) stay when used during convalescence following critical illness will reduce the development of new onset PTSD.

Patients who spent more than 72 hours in ICU were recruited to the trial. Diaries were produced by healthcare staff and family members, with daily entries containing text and photographs. Starting the diary took a significant amount of time as it was important to explain why the patient had come to ICU. However, once it was started, each diary entry only took a few minutes to complete.

352 patients were included in the randomised group. 175 patients received the control treatment and 177 the intervention (diaries). 322 patients made it through to the end of the study.

Patients were presented with the diaries one month following their discharge from critical care and the final assessment of the development of acute PTSD was made at 3 months.

The results of the study showed:

The provision of an ICU diary was associated with a reduction in the incidence of new-onset PTSD. Patient feedback about their diary was very positive with the majority reading it a number of times over the two-month follow-up period. The lower occurrence of new-onset PTSD in the intervention group is encouraging and suggests that an ICU diary may represent an important first step to help patients come to terms with their experiences.

Last reply was January 12, 2018
Try out our members features!