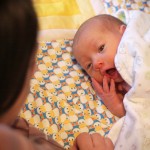 Research has shown that women with unidentified and untreated maternal depression may negatively affect their children’s mental health, with estimates of mild to moderate depression in the first few months after birth ranging from 10% to 20% (O’Hara, 1996). Post-natal depression (PND) is defined as an episode of depression occurring within a year after the birth of a child. Stressful life events and a lack of social support increase the mother’s risk of developing PND (Chaudron, 2003). Children of depressed mothers are also reported to be at a higher risk of mood disorders in later life, as are partners of mother’s with PND.

An initiative in Australia (Beyond Blue) recommends that mothers are screened in the antenatal and postnatal period for PND. However, this approach relies on mothers attending well-child clinics. Mothers with PND symptoms are less likely to attend scheduled appointments, and more likely to use Emergency Departments (EDs) (Minkovitz et al, 2005). As visits to emergency departments are relatively common with infants, screening for prevalence of PND in EDs could identify mothers who need help, where they have not been identified as having PND in other settings.

Stock et al (2012) conducted a prospective observational study of the prevalence of PND in mothers of infants aged 14 days to 6 months, presenting with non-critical conditions to an emergency department (ED) in Melbourne, Australia. The main measure used to determine PND was the Edinburgh Post Natal Depression Scale (EPDS), a widely used and researched scale for PND. Mothers were asked to complete the EPDS post-triage and before seeing a doctor. All mothers were offered a ‘maternal care pack’ containing information about PND, whether they took part in the study or not. Those who returned a positive screen, or answered that they had experienced suicidal ideation were offered a further social work assessment.

200 mothers participated in the study. The mean age of the infants was 3.6 months. The maternal mean age was 30.9 years. Most mothers were partnered and delivered their child by a vaginal birth. More than half had other children and were university-educated. A univariate analysis of associations based on baseline information and demographics shows that mothers with a positive screen proved strong associations with a history of depression, single parent status, indigenous status or a crying baby as the main presenting problem.

At the time of publication no similar studies had been conducted that specifically investigated the prevalence of PND in mothers attending EDs with their infants. Although this is a small scale study conducted in one specific hospital in Melbourne, the results show a high prevalence (16%) of PND in mothers presenting at the ED.

A large scale study completed in Australia, which screened 12,000 mothers for PND in the community, found a prevalence rate of 7.6% using the same measure (Buist and Bilszta, 2006). This study shows a prevalence of more than double that in the community. Furthermore, more than half of the total sample group had not previously been screened for PND. This indicates the potential for mothers presenting at EDs not to have their PND identified and to go unsupported.

The study shows that screening for PND in emergency departments could increase the likelihood of PND being detected. Also, it was found that mothers with PND were 4.8 times more likely to have a history of depression than mothers who screened negatively.  This indicates the need to monitor new mothers who have experienced depression in the past. Tracking and supporting mothers to recognise early symptoms of depression is vital if we are to help the thousands of women who experience postnatal depression.
Photo courtesy of ADS Ltd

As a mother who has recently experienced PND, the difficulty in getting healthcare practitioners to recognise that my anguish, my weight-loss, my sleeplessness and my inability to cope with the tiniest of challenges could be attributed to depression, was a long and drawn out process. I can confirm that mothers with babies who do present with non-urgent physical symptoms, or those that tend to cry a lot, often have their own support needs, both physical and mental.

Although in my case I did ask my healthcare providers for help, I was often pushed towards trying to explain my sheer exhaustion and physical decline through physical health investigations. Unlike some mums with PND, I didn’t experience problems with attachment to my child, I became hyper-vigilant instead, constantly worrying about my daughter’s well-being. This meant that I did attend the GP practice, and Accident and Emergency, on a number of occasions with my daughter, although for genuine reasons (she suffered reflux for the first year of her life). Not once did anyone ask me how I was feeling, in fact one Doctor suggested I was neurotic.

If I hadn’t stumbled upon a GP who was willing to listen, I don’t know what my prognosis would have been. As a result my PND lasted around 2 ½ years, my daughter is now 4. I’m only just able to talk about my experiences; some of this is down to the stigma surrounding mental health – a stigma that I have been trying to fight for the last 12 years to help others. If we are to help mothers in similar situations, routine screening for PND is vital, not only in the GP Practices, or through other post-natal health care providers, but in places that mothers who haven’t accessed services might present.

PND can be prevented, especially in mothers with a previous history of depression.  Tracking and supporting mothers to recognise early symptoms of depression is vital if we are to help the thousands of women who experience PND. Useful information about PND can be found on the NHS Choices website.