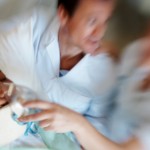 A systematic search and random effects meta-analysis was conducted by Dr Alex Mitchell from the Department of Liaison Psychiatry at Leicester Royal Infirmary, who identified 22 analyses of possible inequalities in coronary procedures in those with defined mental disorder, of which 10 also reported results in schizophrenia or related psychosis.

The authors conclude that further work is needed before any kind of causal link can be established.

Last reply was October 6, 2014
Try out our members features!