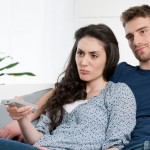 You won’t be surprised to hear that Mrs Elf and I have stopped watching the Oak Tree TV News and we’ve also stopped listening to the Woodland Wire on the wireless. Goodness me, the news is always so depressing! “Blah blah blah, chalara ash dieback, blah blah blah, badger cull”. To be honest, we’d rather not put ourselves through all the stress.

It’s much the same with you humans as far as I can tell. Bill Hicks summed it up nicely:

So what impact is this 24-hour news assault having on men and women? Is it physiologically stressful? Do women and men react in the same way?

A small study conducted by researchers in Montreal, Canada, tested 60 French-speaking people (30 women and 30 men) to see how reading bad news affected them, how they performed during a subsequent stressful event, and how well they remembered the negative news the following day.

The researchers randomly assigned the test participants to one of two arms:

All participants then took the Trier Social Stress Test, which consists of a mock job interview followed by verbal and mental arithmetic tasks.

The following day they were telephoned (unexpectedly) and asked to recall as many news items as possible from the newspaper task they were exposed to the day before.

Saliva samples measured cortisol (the stress hormone) at various stages throughout the testing and the participants were also asked to rate how stressful they found the tests.

These results suggest a potential mechanism by which media exposure could increase stress reactivity and memory for negative news in women.

Well there’s nothing here to get this elf back paying his license fee. I’m going to curl up with some John Hegley poems and a nice cuppa and hope that Mrs Elf doesn’t fret too much about those poor badgers.  It looks like they’re safe for a few months at least!

Last reply was December 2, 2012
Try out our members features!