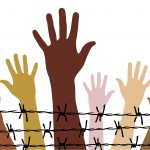 New research published today in the Lancet shows that up to one in four women prisoners in England and Wales self-harm every year. The largest study of self-harm in prisons also reports that female prisoners are four times more likely to self-harm than male inmates.

Individual studies have explored the risk factors for suicide in European prisoners and associations have been reported with violent offences (Rabe, 2012), increased cell occupancy (Opitz-Welke, 2013) and self-harm (Humber, 2013). However, individual studies to date have included no more than 500 prisoners who self-harmed, so a more complete study is long overdue. 20-24% of female prisoners self-harmed each year

The research team (mostly from the University of Oxford) carried out a case-control study of all prisoners in England and Wales (from Jan 2004 to Dec 2009) to ascertain the prevalence of self-harm in this population, associated risk factors, clustering effects, and risk of subsequent suicide after self-harm.

They employed Bayesian techniques to look at how the people who self-harmed were clustered. While self-harm is a substantial problem across the board, it is a particularly serious issue for women in prison who make up only 5% of the prison population but account for half of all self-harm incidents. Moreover, now we know the extent to which the risk of subsequent suicide in prisoners who self-harm is greater than the general prison population, suicide prevention initiatives should be changed to include a focus on prisoners who are self-harming, especially repeatedly.

This is a well conducted and very nicely reported study, which adds significantly to our knowledge in this area. It tells us that the burden of self-harm in the prison population is high and that this burden is largely borne by a subgroup of women who self-harm repeatedly. There is evidence of clustering of self-harm episodes, which suggests that the contagion effect may be contributing to higher rates.

These results show that prevention of suicide in prisons should focus on inmates who are self-harming and there should be a special focus on women who repeatedly self-harm.