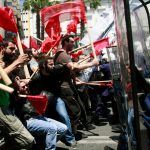 In April 2012, Greece was shocked by the suicide of a 77 year old pensioner, a retired pharmacist who shot himself outside the parliament building in Athens. In a note, he stated that he had decided to end his life as he did not want to be reduced to foraging in bins for food. The suicide encapsulated the despair of many of the older generation in Greece. In this period, pensions and other benefits were cut by up to 25% as part of the conditions of the loans that the government received to tackle the sovereign debt crisis. Prior to the economic crisis Greece had one of the lowest suicide rates in the EU.

As the authors of an important recent paper note, austerity has been discussed in terms of broader economic and social policy (Antonakakis et al, 2016). There has been little specific consideration of its impact on suicide mortality. The paper examines trends across five countries in the “Eurozone periphery”: Greece, Italy, Ireland, Portugal and Spain.

In 2008, following the global financial crisis, many countries experienced an increase in government debt and budget deficits. This led to interventions by both individual governments and the so- called “Troika”; the European Commission (EC), the European Central Bank (ECB) and the International Monetary Fund (IMF). In return for bailout packages to tackle the crisis, the Troika imposed draconian monetary policies. These included large cuts in public and welfare spending, tax increases, privatisation of services and changes to labour laws. This package of policies has become known as fiscal austerity. The introduction of fiscal austerity was controversial as it was argued that it would prolong the recession rather than shortened it.

As the paper notes, in the period 2009-2013, the unemployment rate in these five countries increased by 186.5%. Youth unemployment increased by 126.8% (in Spain it was over 50%). These figures are well above the rates in other Eurozone countries. The suicide mortality rate tends to increase in periods of high unemployment particularly if there are also reductions in the provision of welfare.

This paper sets out to investigate:

the effects of fiscal austerity, among other socio-economic control variables, on suicide rates in all Eurozone peripheral countries over the period 1968-2012. 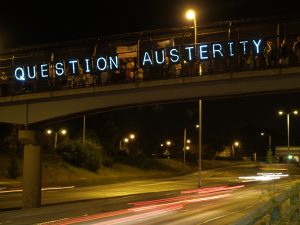 This new study seeks to shed some light on the relationship between fiscal austerity and suicide.

The researchers collected annual statistics for suicide for the five countries in the period. A suicide rate per 100,000 of the population was produced. This overall figure was then broken down by age and gender.

The study methodology sought to control for various economic and socio-demographic differences.

For the purposes of this study, the principal measure for fiscal austerity was government expenditure, although the study does include some alternative proxies of fiscal austerity in their “robustness analysis”.

Suicide is a very complex and multifactorial event, which needs to be examined in its societal context. Clearly, this study does not prove a causal link between fiscal austerity and a rise in suicide rates, but these results should be added to the wider pool of evidence that is considered by Governments, policy makers and citizens.

Other studies do provide some evidence on a single-country level (again looking at Greece) of the relationship between economic austerity and suicidal behaviour (Antonakakis et al, 2014; Branas et al, 2015). However, much more detailed work needs to be done to rule out potential confounders.

The debates about economic policy can often be dry and arid. For non-specialists, like myself, the sovereign debt and Eurozone crises are presented in very technocratic language. This research goes behind these debates to examine the reality of what happens when the social welfare programmes are cut so severely in such a short period.

This paper can be read alongside the work of Marmot and Pickett and Wilkinson, which show that policy making has to have health and social justice at its heart. 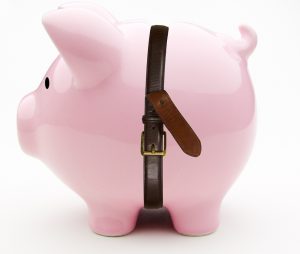 Further evidence is needed before we can be sure of the link between fiscal austerity and suicidal behaviour.