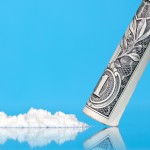 A considerable amount of research has attempted to shed light on the key antecedents of drug use. The role of personality traits, in particular, has been explored in great detail; indeed the idea of “the addictive personality” has often been discussed.

Although we elves feel that the addictive personality is a simplification of a much more complicated problem (Kerr, 1996), there is no doubt that certain personality traits are associated with drug use, for example personality traits such as impulsivity reliably predict substance misuse (Verdejo-Garcia, 2008).

Of course drug use does not occur in isolation purely driven by an individual’s traits; complex social and economic factors also influence the expression behaviour. For example, living in relative poverty is associated with increased drug use (Degenhardt, 2012).

The current study (Sutin, 2013) investigates which of the big five personality traits (Neuroticism, Extraversion, Openness, Agreeableness, and Conscientiousness) predict opiate and cocaine use. The authors also investigate whether poverty mitigates or increases the impact of these personality traits on drug use in an urban population.

Participants were taken from the Healthy Aging in Neighbourhoods of Diversity across the Life Span (HANDLS) study (Evans et al., 2010). This is a larger study that aims to investigate the affects of race and socioeconomic status on major health issues in the US.

The 412 individuals described in the current study were from the Baltimore area, 66% were female, 55% African-American, and 50% were living below the federal poverty line.

Participants were included in the current analysis if they had given information on use of opiates, cocaine, and completed the Revised NEO Personality Inventory (NEO-PI-R). This questionnaire assesses the big 5 personality domains (Neuroticism, Extraversion, Openness, Agreeableness, and Conscientiousness) as well as 30 sub factors. Lower socioeconomic status is a risk factor for drug use Of course this study does not shed light on whether individual differences in personality traits are a cause or consequence of drug use. Indeed, the authors acknowledge this as a limitation and argue for the importance of longitudinal research in this area, with continued assessment of personality along with changes in socio-economic status.

This certainly makes interesting reading and really highlights the role of society, rather than just the individual, in the aetiology of drug abuse.  It is, however, disappointing that the authors did not look at the direct association between poverty and drug use. Degenhardt L, Hall W (2012) Extent of illicit drug use and dependence, and their contribution to the global burden of disease. The Lancet 379: 55-70. [Abstract]