Home » Posts » Mental health » Street triage: all it’s cooked up to be? 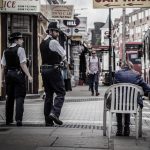 People in England and Wales with an active mental health problem, who are considered to show signs of risk to themselves or others, located in a public space, are sometimes apprehended by police and brought to a safe place under the auspices of the Mental Health Act for assessment and treatment. The power to do this is defined in section 136 of the Mental Health Act. Detention by police, conveyance to a designated 136 “suite”, lengthy assessments by nursing, medical and social care staff, and ensuing use of inpatient care, is extremely costly and labour-intensive, and tends to be reserved for the most acutely unwell people.

In 2013, the then Care Minister Norman Lamb announced several regional pilots of “street triage”, with a view to improving the experiences of people with mental health needs who end up interacting with police and caring professions (Department of Health, 2013). Street triage is a strategy to reduce 136 admissions, which involves having a mental health professional, typically a nurse travel with police officers and assess people, who might otherwise be candidates for 136 arrest, and instigate treatment.

March 2016 saw the publication of an NHS commissioned evaluation of the nine pilot schemes in England, which included quantitative and qualitative data analysis (Reveruzzi & Pilling, 2016). This evaluation concluded: “All but two of the nine Street Triage schemes resulted in a reduction in the use of s136 detentions, when compared with an equivalent timeframe from the previous year.”

The study that is the focus of this blog, published in BMJ Open in November 2016, quantitatively describes a street triage service in the North East of England, and the effect that this service had on the use of section 136 in that region (Keown et al, 2016).

Data on admissions and uses of other Mental Health Act powers is also presented. Rates of street triage engagement are reported, based on estimates of population at risk from the Office for National Statistics. 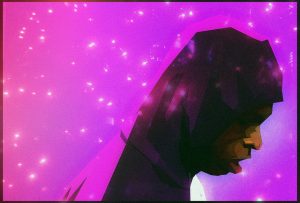 Reproduced from the paper, the authors show this scatter plot of reduction of 136 rate against the rate of street triage, based on six areas in Tyne and Wear: 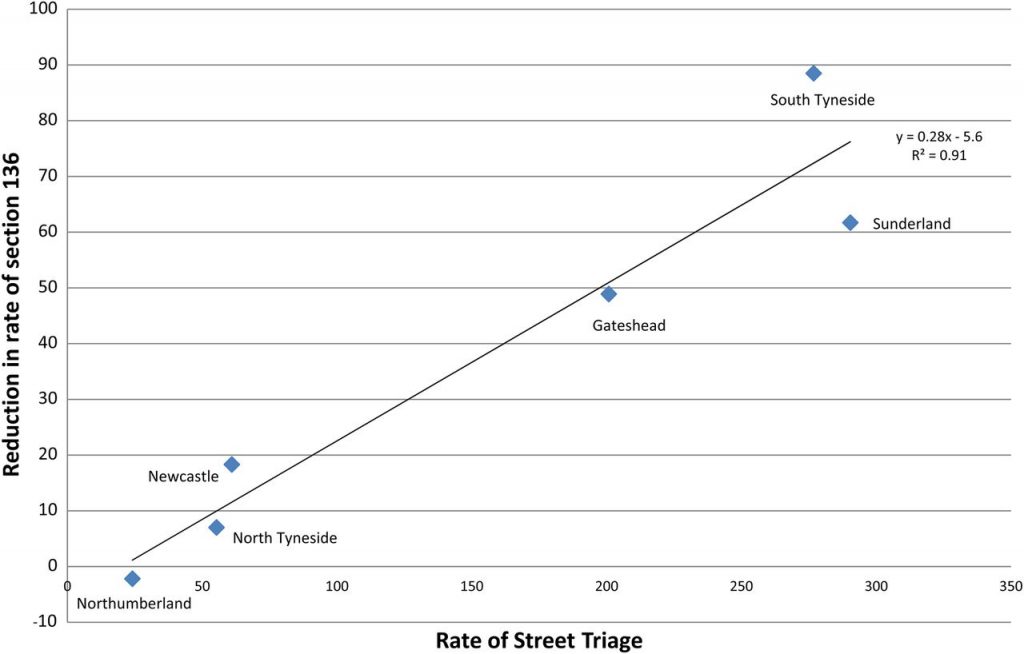 Street triage leads to a reduction in 136 detentions.

Indeed, the analysis is based on a large, densely populated geographic area, with a high background rate of 136 use. Statistical hypothesis testing suggested large differences in 136 rate in the before versus the after period. Given that 136 did not fall in areas where street triage was not happening, an effect of street triage on 136 seems plausible, under the assumption that nothing else important changed in those particular areas over the study period, that might have affected the occurrence of 136 detentions.

However, this assumption doesn’t seem to be covered in much detail in the paper. What information there is in the paper, indicating that one 136 suite closed during the study period, might be expected to reduce the detention rate on its own, although possibly not enough to account for the extent of change observed in this analysis.

Although the geographical area is large, the rate across six units is analysed, limiting statistical power. It is possible that had other units from neighbouring regions been sampled in the study, the association might have been different. There isn’t a great deal of information on measurement in this study; for example were street triage engagements more likely to be recorded correctly in areas with lots of police activity?

There are also important issues with generalisability here. There was not much description of the street triage intervention, so we do not know how this may be different to street triage in other areas, including how it was experienced by patients and the public. Finally, this study did not randomise units to the intervention, and there were only 6 units analysed, so we cannot be sure that it was street triage that was having the effect, and not other background factors. This means that the use of the quantity “number needed to triage”, which assumes a causal effect, is premature. However unlikely it might be, confounding factors that resulted in a reduction in 136 activity cannot be discounted as a cause for these results. Furthermore, it is very unclear how the changing demographic, local policy, and mental heath landscape might have influenced the results. 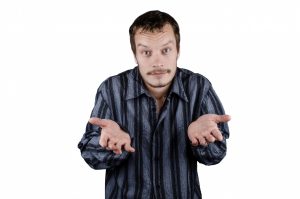 The methodology of this research means that we can’t be sure the reductions in section 136 activity are a direct result of the street triage work.

The main implications for this study are for research. Reducing section 136 use would appear to have been treated as an adverse outcome in this study, but is that necessarily true? Research on 136 needs to broaden out to adopt a variety of different approaches, with an emphasis on routine data and the experiences of patients. This must take the form of better descriptions of who is detained using this Section and for what reasons, in order to identify what reasonable clinical outcomes we should be measuring.

In clinical practice, we see many patients who, without the use of 136 powers, would not have seen a clinician until much further into an episode of illness. In a resource-poor NHS, how realistic it is to comprehensively roll out mental health staff to accompany police officers remains to be seen. 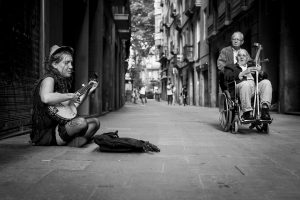 Research on 136 needs to broaden out to adopt a variety of different approaches, with an emphasis on routine data and the experiences of patients.

Department of Health (2013) Extending the street triage scheme: new patrols with nurses and the police.

Last reply was February 15, 2017
Try out our members features!