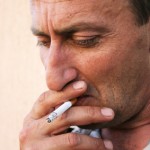 We know from epidemiological studies that people with schizophrenia are 2-3 times more likely to smoke than the rest of the population.  We also know that schizophrenia is associated with a higher risk of coronary heart disease.

This retrospective cohort study carried out by researchers from the University of Maryland set out to explore the impact of smoking on mortality in people with schizophrenia or schizoaffective disorder. The research team used the inpatient admission records of 1,213 adults (aged 19-69) who had been admitted for the first time and had recorded information on smoking on their records. People treated only with first generation antipsychotics or no antipsychotic at the time of admission were excluded.

More than half (54.7%) of the participants in the study were smokers. Smokers were defined as anyone who smoked cigarettes on admission or who had a history of dependence on cigarettes. Researchers reviewed clinical records to collect data on DSM-IV diagnoses, smoking status, substance use and comorbid conditions. Analyses were adjusted for age, gender, race and antipsychotic treatment.

Smoking increases the risk of all cause mortality and also cardiac-related death in people aged 35–54 with schizophrenia. This risk is increased with increasing amount smoked.