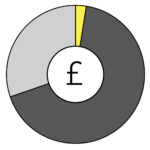 For research, challenges are big, possibilities are real, innovation proliferates, and transformative discoveries are within reach. However, the translation of research findings into practice is slow, the impact on policy is insufficient, and evidence indicates that research funding is lagging far behind this recent change in population awareness. 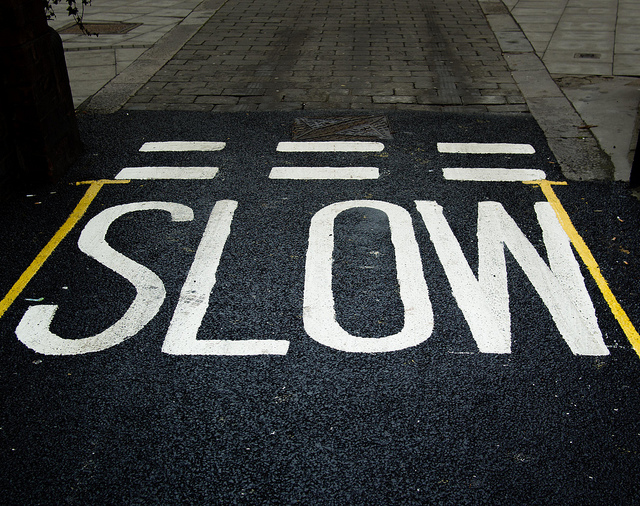 The translation of research findings into practice is slow, the impact on policy is insufficient, and evidence indicates that mental health research funding is lagging far behind.

Mental health research: still not getting its fair share

The economic impact of mental illnesses on society is considerable with an estimated £100 billion per year. The take home message here is not that mental illness is more important than cancer but instead, that given its burden on society, mental health research should receive its fair share of investment. It will also not be a surprise to read that mental health research funding has remained unchanged for the past decade, with a comparable spending of £115 million on average per year between 2008 and 2013. 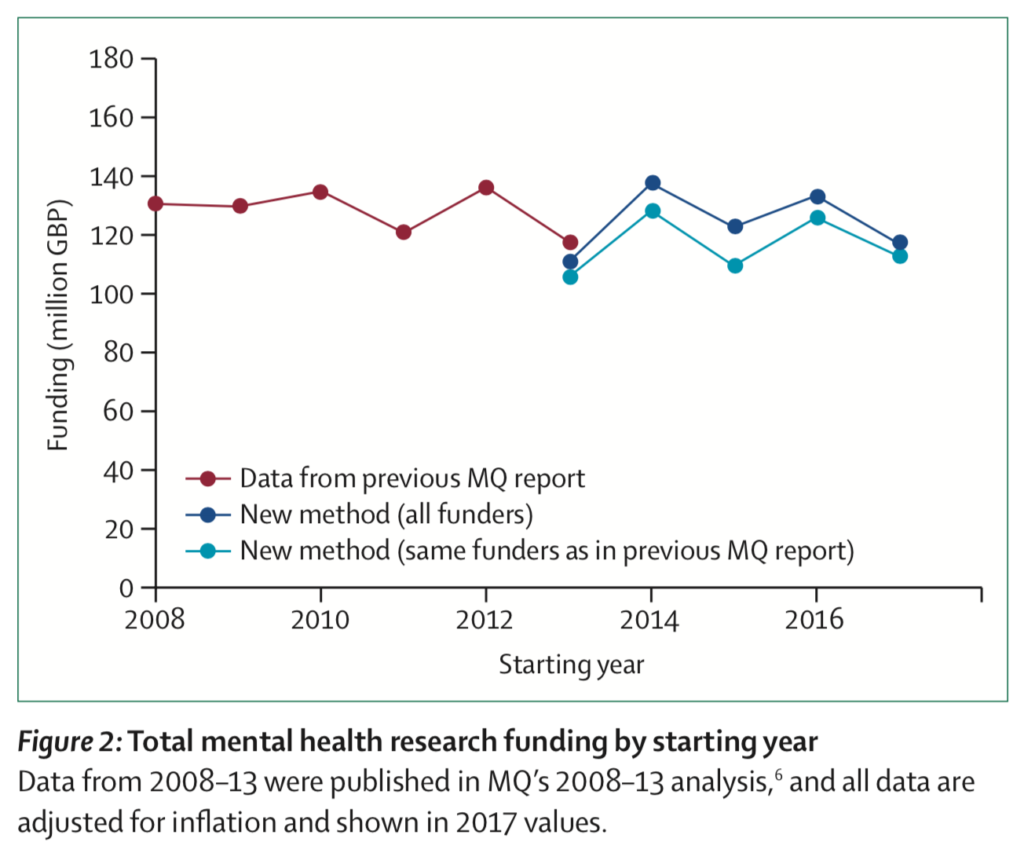 Where does the money go?

The MQ report has a new way of classifying and presenting research funding (by mental health conditions, by type of research, by type of funder, and by research organisation), which brings up some surprising findings: 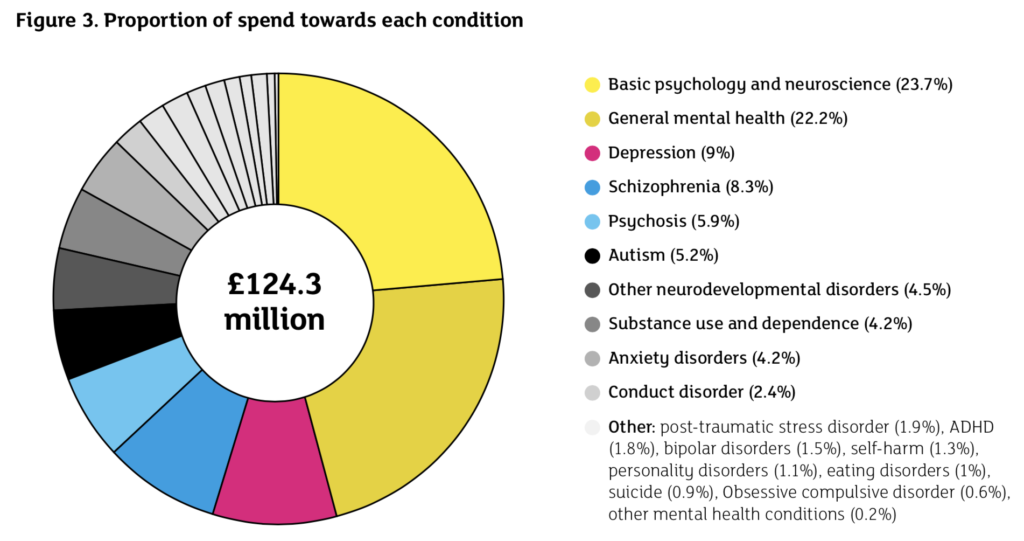 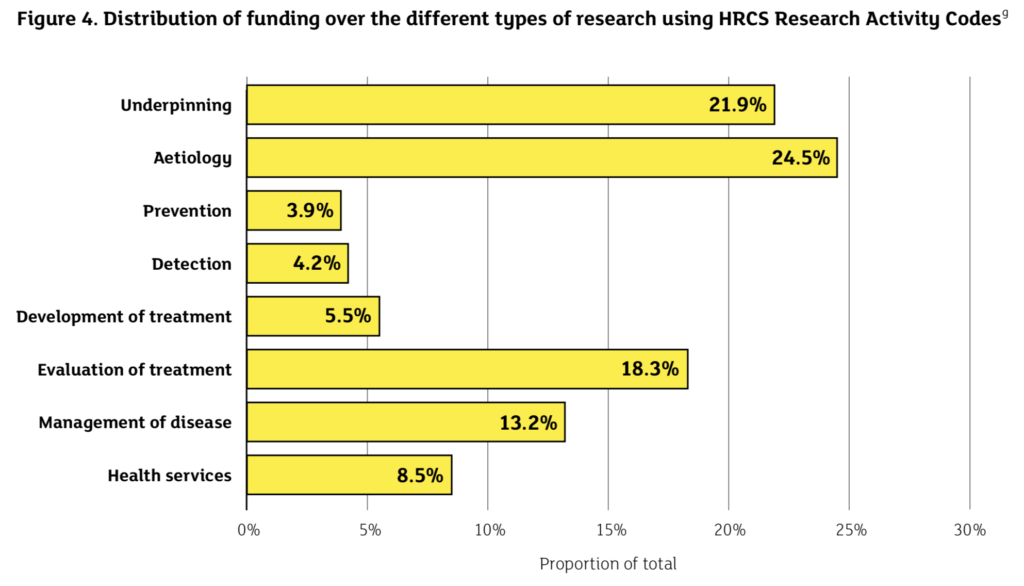 We hear a lot about preventing mental illness these days, but this narrative is not reflected in research funding.

Sources and destinations for funding 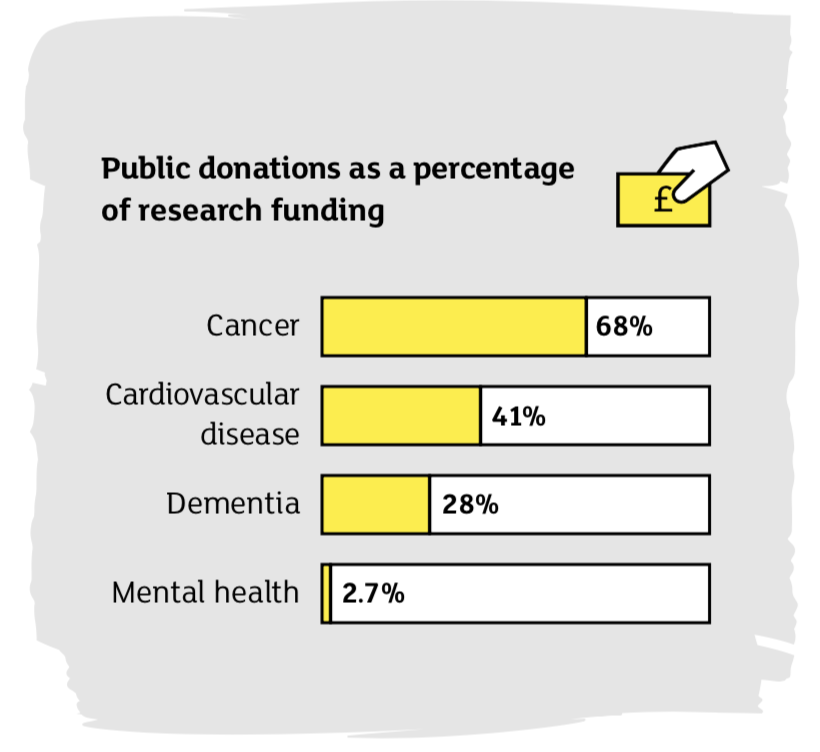 Why does the general public not donate to mental health in the same way as they do to cancer, cardiovascular disease and dementia?

To say that there is an urgent need for more research funding to face the challenges posed by mental ill health is an understatement. In the current political and economic climate, one option is to identify key research priorities to allocate the limited resources available for the mental health crisis. However, we must keep on demanding more funding for mental health research from the government and from other funders, as a priority on a similar level to physical health. We should also strengthen, or in some instances change, our approach to research. For example, mental health funding needs to continue: 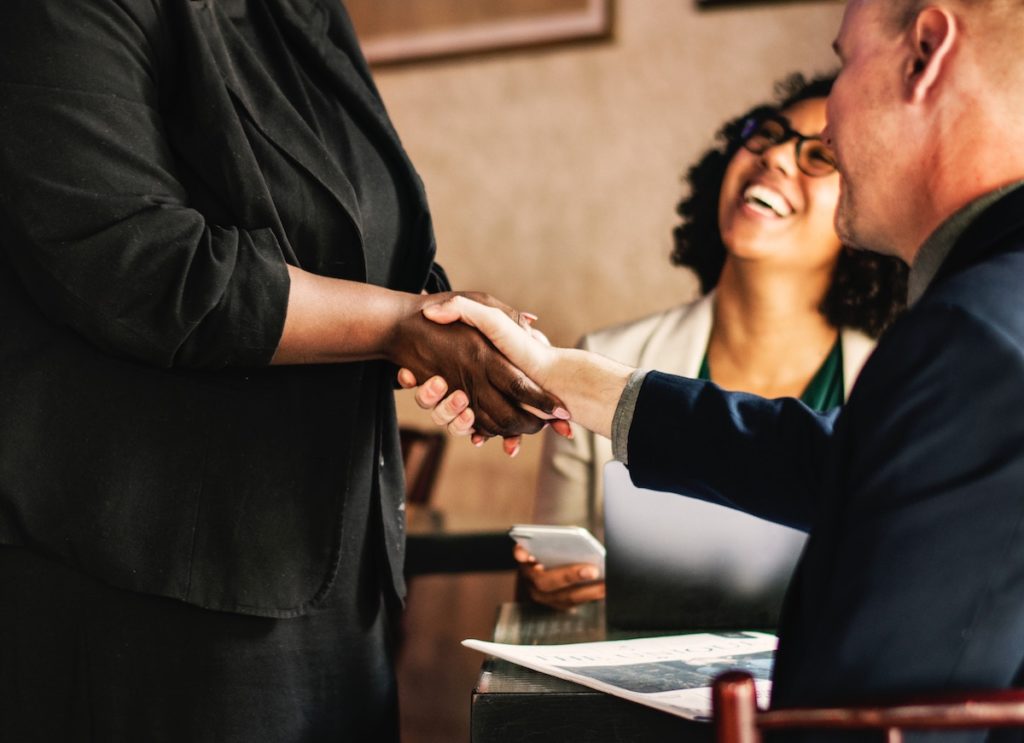 Cross-disciplinary working is a particular focus of the 8 new UKRI-funded Mental Health Networks.

Some of these ideas are not new and have been highlighted in the cross-disciplinary mental health research agenda (PDF) published by UKRI in 2017. With MQ’s ambition for change and as a community of advocates for mental health, we can also think of new ways to fund mental health research. Partnerships across various funders is a good way forward and will also support interdisciplinary research. Greater mental health awareness may generate greater public and philanthropic donations, but we need a framework around whether this is on an institutional, charity or funder level. We can support a loud and bold mental health awareness campaign that not only appeals to the general population but goes deep to reach the most disadvantaged and vulnerable groups of people who need knowledge and education about mental health. It is also our responsibility, as a community of mental health researchers, to propose the best and the most innovative research projects that are at the forefront of science. 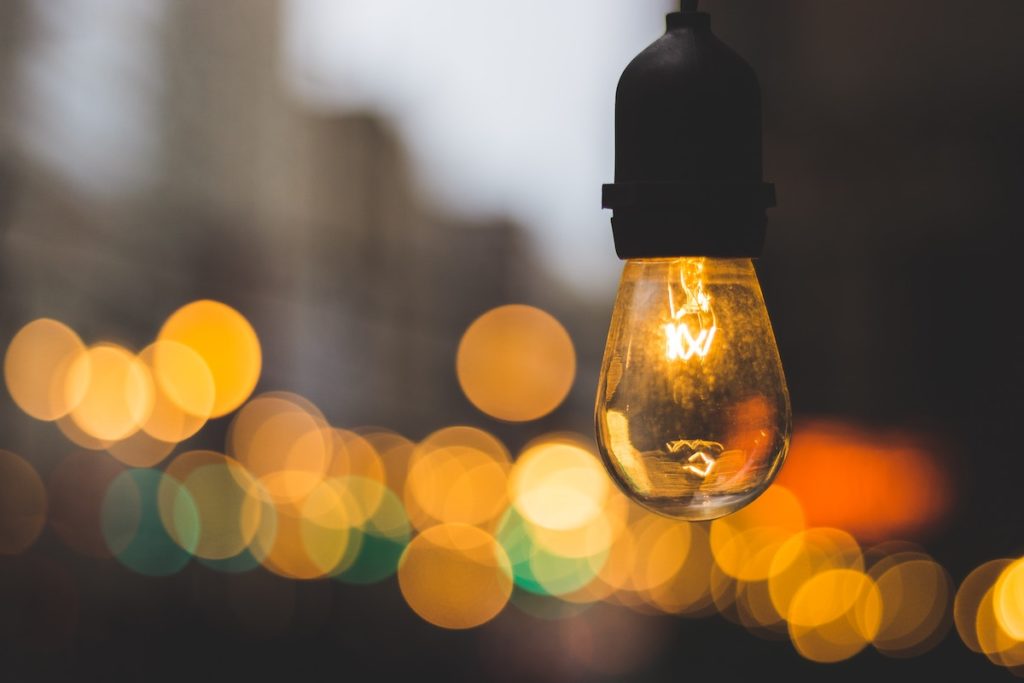 It is also our responsibility, as a community of mental health researchers, to propose the best and the most innovative research projects that are at the forefront of science.

Louise Arseneault is currently ESRC Mental Health Leadership Fellow and her role includes providing intellectual leadership and strategic advice in the priority area of mental health. It is a broad agenda including engaging research communities, promoting collaborations, advocating for mental health research, championing the co-design and co-production of research and providing advice to the ESRC and other research councils.

The views expressed in this blog are those of the author and not the Economic and Social Research Council (ESRC).