Home » Posts » Mental health » depression » All scales are not equal; which is the best for detecting depression after stroke? 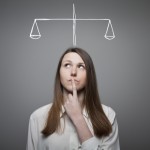 Roughly 33% of stroke sufferers also develop depression at some point. This may be an under-estimate of the problem, as depression is difficult to detect in people with poor physical health. If missed, depression can led to reduced quality of life, increased disability and a worsening of physical symptoms.

There are a whole host of scales of various shapes and sizes designed to screen for depression.  The best scale needs to be sensitive (able to detect depression in those who have it) and specific (able to rule out depression in those who don’t have it). It should avoid false positives (when people are diagnosed as having an illness they don’t have) and false negatives (when people are not diagnosed as having an illness they actually have). These things make a scale valid, ensuring it is accurate and efficient.

Most depression scales were not designed for use in physically unwell populations, although many examine physical symptoms. Until now there have been no meta-analyses or systematic reviews of screening scales in stroke populations. A British research collaboration (Meader et al.,2013) have examined the validity of well established screening scales at detecting depression after stroke. More information about different depression scales can be found on Wikipedia.

The researchers conducted a broad search of commonly used databases for studies assessing the validity of screening tools for depression. The main outcomes of interest were sensitivity and specificity.

They obtained pooled estimates of sensitivity and specificity using a form of meta-analysis (Hierarchical Summary Receiver Operating Curve or HSROC meta-analysis for those who like their stats).

They found 24 studies that met their inclusion criteria. Independent verification of scale performance at different sites was not always possible due to lack of studies. It would have been interesting to see all the results for CUI- or CUI+, but they were not presented.

no current scale is an adequate proxy of interview defined depression and all positive screenings should be followed by a thorough clinical assessment, diagnostic interview or repeat screen. All positive screenings should be followed by a thorough clinical assessment, diagnostic interview or repeat screen

The scales that have the highest clinical utility are the HDRS (clinician administered scale) and the CES-D (self administered scale) in stroke sufferers. No scale was adequately able to rule-in a diagnosis with few false positives. Consequently, some people could be diagnosed and treated for depression who don’t have it. Having a stoke is a major life event and some people will have an understandable adjustment reaction rather than depression, which should be managed differently.

These scales have value in clinical practice, but are not a replacement for a good clinical assessment. There is increasing anxiety amongst clinicians in mental health that highly trained and skilled professionals (an expensive resource) can be replaced by a cheaper alternative with limited training. If this happens, there will no doubt be heavy reliance on screening scales in the absence of experience and expertise. This study provides evidence to suggest that screening scales are not a substitute for the highly skilled professional where co-morbidity is concerned.

More information about stroke can be found on the Stroke Association website.