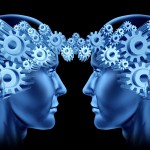 It is well-documented that there are gender differences in mental health (see for example this Men’s Health Forum publication (PDF) about key mental health issues affecting men). In early development, boys are at a significantly higher risk than girls for meeting diagnostic criteria for autism spectrum disorder (ASD), as well as other developmental problems (e.g. developmental coordination disorder (DCD) or attention deficit hyperactivity disorder (ADHD)).

Studies also suggest that on the whole, females perform a little better than males on certain aspects of social cognition. ‘Social cognition’ is a general term for social abilities involved in understanding and reasoning about other people’s thoughts and feelings, including the ability to recognise facial emotions and to make social judgments. Social-cognitive difficulties are particularly relevant to ASD.

The reasons for the gender difference in risk for ASD and related social-cognitive difficulties are not yet understood. Given that social abilities typically begin developing very early on in life, this difference is thought to be biological in origin. A few studies to date have compared the brains of males and females to look for differences in brain areas thought to be involved in social cognition.

A PLoS One study published in December 2012 compared the brain areas actively involved in a task of social cognition in adult males and females. The aim of the study was to find clues as to the biological underpinnings of social cognition, which could be relevant to better understanding ASD. 25 male and 22 female healthy volunteers were matched for age, education and IQ and underwent functional magnetic resonance imaging (fMRI). fMRI is an imaging method which can be used to map the activity going on in the human brain while the participant completes a specific task inside the MRI scanner.

The volunteers were asked to complete two social judgment tasks:

The brain activation in these tasks was compared to that when they were asked to simply judge the gender of the same faces (the control condition). All the faces had previously been rated reliably on these characteristics by a team of raters. The authors conclude that the study demonstrates:

a marked difference in social brain function between men and women which is accentuated in individuals with ASD, suggesting a neurobiological substrate for the increased rates of ASD in males.

However, one important note of caution is that the emotion-based and cognitive-based social judgment tasks used in this study are fairly limited in how relevant they are to real-life reasoning in social situations. As such, it is premature to draw conclusions about social cognition (which is a broad term for many different reasoning and cognitive abilities) in general.

In short, this study attempts to pinpoint which areas of the brain are involved in social judgments and to determine if there are differences in how the brains of males and females make these judgments. These are small but important steps towards trying to understand how social difficulties arise in ASD and why males are more likely to develop this condition. As is very often the case in research, much more work is needed on this subject!