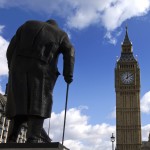 Vincent Van Gogh, Winston Churchill, Ernest Hemingway…it only takes a quick search on the internet to find a long list of artists, leaders and eminent thinkers who, it is claimed, were afflicted with bipolar disorder.

The link between creativity and madness has long been acknowledged in popular culture and has gained substantial support through psychological research (Kyaga et al., 2013).

In a recent study, people with bipolar disorder described how being in a manic state helped them express their creativity showing greater ease in their writing and drawing (McCraw et al., 2013). Whilst this evidence provides great insight into human psychopathology it may risk romanticising the disorder and should be taken with a pinch of salt.

Bipolar disorder is a serious mental illness characterised by recurrent episodes of mania and depression. People with the disorder have a 10-fold increased risk of suicide compared with the general population (Crump et al., 2013). The lifetime prevalence is 1.4% with an onset typically between the ages of 13 and 30 (Merinkgas et al. 2007).

To date, research looking at the association between leadership and mental illness been based on retrospective data which has made conclusions difficult to reach. To better understand the nature of this relationship, Kyaga and colleagues (2014) made use of Swedish medical and occupational records to investigate whether people with bipolar disorder and their siblings were more likely to have greater leadership potential as young adults and hold more executive and political professions later in life. Celebrities like Catherine Zeta Jones have helped raise awareness of bipolar disorder, but recent surveys show that they have not helped to improve public understanding of the illness (Rethink, 2014).

People with bipolar disorder were identified using records of diagnoses from national public registers. Participants were then split into a pure bipolar group (only diagnosed with bipolar disorder) and a general  bipolar group (those who also had co-morbid diagnoses). Siblings of these participants were also located, resulting in four separate groups. For every participant in each of these groups, the authors randomly selected 10 controls who were matched on gender and birth year.

The first outcome of interest was leadership potential. This this was only available for males as the data was taken from semi-structured questionnaires administered during military service (compulsory until 2010). The measure assessed mental stability, emotional maturity and stress tolerance. Scores were standardised on a stanine scale from 9 (high) to 1 (low).

The second outcome was whether participants had held an executive or political profession at least once. This was measured using data from mandatory censuses and yearly databases of health insurance and labour market data which had been coded according to Nordic and international classifications of occupations.

Using a series of logistic regressions the authors calculated the odds of having high or low leadership potential and of holding an executive or political profession. Leadership potential scores were categorised on a 9 point scale; a score of 5 was used as the reference group.

Kyaga and colleagues identified 22,980 and 68,915 people with pure and general bipolar disorder respectively. The number of participants in each analysis differed as leadership potential scores were confined to male participants only and information about political professions was only available from 2001-2009.

IQ scores were also available for male participants (measured during military service). When analyses were adjusted for IQ scores all effect sizes were attenuated and the results outlined above were no longer significant. We performed a large-scale epidemiological study on assessed leadership qualities early in life, and prevalence of executive professions later in life. The study provides strong support for the idea that traits related to bipolar disorder are positively associated with superior leadership qualities.

The main strength of this paper lies in the large number of participants included, which would be impossible to replicate without the use of national register data. In addition, the use of whole population data increases the validity and generalisability of findings.

This study is limited in the conclusions which can be drawn from the results. Whilst the authors drew strong conclusions, effect sizes in favour of the research hypothesis were small (ORs ranged from 1.08-1.85) and once IQ had been taken into account confidence intervals crossed the line of no effect.  In addition, to explore the effect of confounders more reliably (IQ data was only available for male participants) the authors could have included other variables in the analysis such as years in education or parent’s occupation which would have been readily available from census data.

Another limitation lies in the leadership potential outcome. As people with a severe psychological illness were excluded from military service, data would not have been available for individuals with a diagnosis of bipolar disorder before the age of 18. Whilst this group would’ve made up a small proportion of the total sample, bipolar disorder in adolescence is associated with a poor prognosis (Post et al., 2006) and the exclusion of these individuals may have biased the estimates. Overall this study provides some evidence of an association between bipolar disorder and leadership traits in young adults. Later in life, only the siblings of people with bipolar disorder were more likely to hold executive and political professions whereas those with the disorder were underrepresented.

This underrepresentation is in line with previous research which has highlighted how people with bipolar disorder face problems with employment (Stang et al., 2007). Marwaha et al (2013) also found that the disorder can lead to workplace underperformance and absenteeism resulting in a downward drift in employment status over time.

Taken together this evidence provides a clear target for employers to support individuals with bipolar disorder by making workplace adjustments such as a clear job descriptions or using sick leave for emotional symptoms as well as physical illness. Future research could further explore the psychological mechanisms which account for the overrepresentation of siblings of bipolar patients in high ranking jobs through qualitative interviews with these individuals.

Stephen Fry explored the issue of creativity and bipolar disorder in his 2006 film entitled ‘The Secret Life of the Manic Depressive‘: