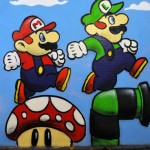 Some of the elves in our neck of the woods like to go on a trip to Mushroom Kingdom from time to time, just to relax and boost their abilities you understand.  Unfortunately being able to double in size or become invincible hasn’t happened in real life yet, but a recent study has looked at whether playing Super Mario can alter the structure of the brain (Kühn et al, 2014).

As playing computer games is a different experience to doing something else, it is inevitable that the brain will change to reflect this, but working out the detail of the changes will be important to better understand the brain.  If playing the game can improve some key cognitive processes, it may offer a fun intervention to complement other treatments for people who are struggling with mental health problems.

How video gaming, and spending long periods of time in front of screens, changes us has been a source of big controversy.  Although there are a few high profile critics of modern technology (see Susan Greenfield on screen technologies), many research papers have suggested that playing computer games can have a positive effect on a range of motor, perceptual and cognitive abilities.  How much these improvements on tests lead to better performance in day to day life skills is an ongoing debate, but in some studies it definitely does (Boot et al, 2011).  One message seems to be: if you are going to have an operation using keyhole surgery, ask for a surgeon who has played a lot of computer games! 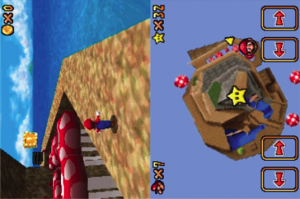 Figure 1: Mario’s view from behind and the birds eye view

Researchers in Germany (Kühn et al, 2014) recruited 48 people who had not played any computer games for the previous 6 months and had never played Super Mario 64.  They randomised them into 2 groups:

Nobody in the study had had any mental health problems in the past and the study lasted 2 months.

The version of Super Mario used is important (and not only to my gaming obsessed pal who insisted I was very, very clear about this issue in the blog).  Participants played Mario 64 on the handheld Nintendo DS XXL console.  I’ve never read a research paper before that included the line: ‘a 3D platformer game where a princess has to be saved’ but that sums up the objective of the game nicely.  To complete the game you need to solve puzzles and navigate around a 3D environment.  You can move freely through the world and there are two screens that show Mario’s view from behind and a birds eye view map (see figure 1).  Learning navigational strategies is crucial.

The participants had two 3T MRI brain scans before and after the game playing.  They also did a number of questionnaires but we’ll focus on the imaging findings here.  Unlike many of the studies done before on a similar topic, the researchers did the analysis at a whole brain level.  This means that rather than deciding in advance which areas of the brain they think might change (a region of interest approach), they look at the whole brain and allow the statistics to decide which areas are important/significant.  In general we should be very cautions about region of interest (ROI) structural imaging studies: they make it more likely there is a false positive and ignore the data from the rest of the brain.  This study used one of the good quality whole brain approaches. The main results are shown in figure 2.

Three areas in the brain increased in size in the group who played Super Mario: