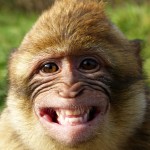 Does a mouse think like a human? Does a cat? Does a macaque monkey? These are fascinating questions to ask on a philosophical level, but they are also of immense practical importance.

Current regulations on drug development mean that animal research plays a huge role in deciding what substances might be safe and beneficial to humans.  This has lead to great success in understanding many aspects of how the body works, and using that to develop treatments.

But is the nervous system different?  If it contains the main adaptations that mean humans can do many more complex things than other animals, can working out how an animal’s brain works reap the same rewards?  Many drug companies have spent a lot of money on compounds that worked very well on mouse behaviours, but did not have the desired effect in humans.  This has contributed to some of them pulling out of neuroscience research altogether.  It means that finding ways to better understand how similar/different animals’ brains are from each other can offer both the hope of better treatments for humans, and fewer animals used to find those treatments.

Using imaging to do this allows for more humane studies of animals close to us the evolutionary tree.  It also offers the opportunity for speculation about the areas of the brain that ‘make us human’.  Whilst it is impossible that there is one area of the brain that contains the essence of humanity, the differences between species offers vital clues as to how the brain functions.

Researchers from Oxford have been combining data from humans and macaque monkeys across a series of studies, and the one we are focusing on today is on a part of the frontal lobe (see figure 1).

The ventral, inferior frontal cortex (vIFC) has been linked with a range of functions, but seems to be heavily involved in modelling the potential consequences of actions and selecting appropriate behaviours for the situation.  It includes Broca’s area, long recognised as part of the system that understands and produces speech. Figure 1 – Click on the image to see a bigger version

The study had three goals:

In order to do this the researchers scanned 25 healthy humans using MRI.  They used two types of MRI scanning: examining the white matter connections in the brain (anatomical connectivity) and functional MRI at rest (functional connectivity).  They also scanned 25 macaque monkeys using fMRI while they were anaesthetised.

The researchers used some very sophisticated analysis methods to meet their goals.  Every tiny area (a 5x5x5mm voxel) in the vIFC was examined for its connection patterns to the rest of the brain.  These connection patterns were then compared to each other and the voxels that had similar pattern were grouped together.  Finally these groups were fitted back onto the anatomy of the brain.  Figure 1 shows the subdivisions found.

A different method was used to subdivide the monkey’s putative equivalent brain areas.  This was done by using already published maps subdividing the macaque brain.  These maps are made by identifying areas that have similar patterns of cells, not anatomical connections. This has been done with humans as well (Broadman areas) and the areas described overlap substantially with the imaging findings in this study, but by no means exactly.

Finally the functional connectivity was compared from region to region to see if the human and monkey regions of the brain match up in how they connect to the rest of the brain.

There was both substantial overlap between human and monkey brain function, and key differences.  The detail for each area is fascinating and if your neuroanatomy is up to it I’d highly recommend looking at the paper’s figures, e.g. figure 2 for two of the subdivisions of the motor part of the vIFC Figure 2 – Click on the image to see a bigger version The first rule of blogging: Never pass up the chance to include cute photos of monkeys.