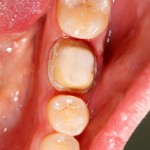 The clinical longevity of crowns is related to tooth preparation. In theory parallel axial walls provide maximum retention and resistance, whilst highly converging walls have the least. The total occlusal convergence angle (TOC) is defined as the converging angle of 2 opposite axial walls in a given plane and has been investigated for its influence on retention and resistance with significant reduction in retention as half the TOC exceeded 5 degrees. The aim of this review was to summarise the available literature on clinical tooth preparation parameters.

Searches were conducted in the PubMed/ Medline, Science Direct, and Scopus databases. Studies were included if the tooth preparations were single complete crowns carried out intraorally or extraorally by a clinician, if the TOC and/or margin width and/or margin angle and/or abutment height were measured, and measuring methods were clearly reported. Two reviewers carried out study screening and only English language studies were considered.

TOC values seem to be the most important preparation parameter. Recommended TOC values have increased over the past 4 decades from an unachievable 2- to 5-degree taper to a more realistic 10 to 22 degrees. Recommended values are more likely to be achieved under experimental conditions if crown preparations are performed outside of the mouth. We recommend that a standardized measurement method based on the cross sections of crown preparations and standardized reporting be developed for future studies analyzing preparation geometry.

The authors note that because of heterogeneity in operator experience, working conditions and measurement method no substantive comparisons could be made on specific values. Mean values for TOC were similar in the 1970-80s to the 2000-10s at approximately 18-25 degrees. They note that several authors indicate that the theoretical idea of 2-5 degrees was rarely achieved and that tooth preparation principles are based largely on in vitro studies. The recommendations from the authors about agreeing standardised measurement criteria are important but more information is also needed on relevant clinical outcomes for these variations in TOC.