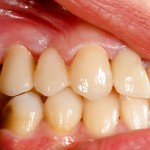 Searches were conducted in PubMed, Google Scholar and Cochrane Central Registrar of Controlled Trials. Two study categories were considered for this review: group 1, comparative studies, in which the study compares multiple lateral occlusion schemes, and group 2, clinical outcome studies, in which the study describes the applied occlusion scheme for the restored dentition. Only English language studies were considered. A narrative summary of the findings was presented.

Within the limitations of this review, the following can be concluded:

This review has searched 3 large databases although it has been restricted to English language studies. In is not clear whether independent selections of included studies has taken place and there is no quality assessment of the included studies presented. The included studies are well summarised and there is a good discussion. However, the number of patients included in the studies is relatively low with the range being 7-53 patients. This suggests that the findings should be treated with caution. While this review focuses on fixed restoration an earlier review (Dental Elf -18th Oct 2012) considered compared BBO and CGO in complete denture construction. That review included 7 RCTs with the majority reporting no difference between the two schemes but again they were relatively small in size.

Dental Elf -18th Oct 2012 – Do complete dentures have to have a balanced occlusion?