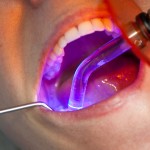 The aim of this study was to investigate the clinical longevity of the Class II nanohybrid resin composite restorations placed with two different adhesive systems, after 8 years.

Adult dental patients requiring two similar class II restorations were invited to participate. Reasons for placement of the restorations were primary or secondary carious lesions fracture of old amalgam fillings or replacement because of aesthetic or other reasons.

All restorations were carried out under local anaesthesia. For patients receiving two restorations the restorative material was randomised by a coin toss to either Xeno III/Ceram X (DENTSPLY DeTrey) or the two-step etch-and-rinse adhesive Excite (Ivoclar Vivadent AG, Schaan, Liechtenstein) followed by the resin composite Ceram X. In participants with only one cavity, a Xeno III/Ceram X was placed.   Adhesive systems were applied following the manufacturers instructions. The restorative material was placed in 2mm layers a cured with a LED light and polished. Two experienced operators placed the restorations.

the nanohybrid resin composite study showed good clinical effectiveness during the 8-year trial up with a 1.6 % annual failure rate for the Class II restorations. No significant differences were observed in durability between the SEA and the etch-and-rinse adhesive. Fracture of restoration was the main reason of failure. Most failures were observed in risk participants.

Acknowledgments .This study was partly supported by the County Council of Västerbotten and DENTSPLY DeTrey.

The randomisation process used in this study (coin tossing) is not considered a robust method of randomisation, as it is potentially open to manipulation. There is also a lack of clarity regarding the number of restorations provided per patient and a small number of patients only received a single restoration. Both of these issues have implications for the analysis. The authors have consequently excluded the single restorations from their analysis. The authors did not find any significant differences between the two approaches. However, there was no power calculation reported to estimate the sample size needed to identify any differences at the outset so this together with the other issues noted mean that these results need to be interpreted cautiously.