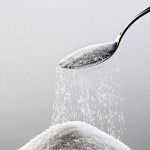 Back in December we highlighted a review by Moynihan and Kelly (Dental Elf – 12th Dec 2013) on the relationship between caries and sugars that was commissioned to inform the development of updated WHO recommendations on sugar.  Another review of the relationship between sugar and body weight by  Te Morenga et al  was also undertaken to inform the recommendations which was discussed by the Lifestyle Elf ( 21st Jan 2013) .

The WHO’s current recommendation, from 2002, is that sugars should make up less than 10% of total energy intake per day.

This was reported by the BBC as  “WHO: Daily sugar intake should be halved.”

WHO- Draft Guideline: Sugars intake for adults and children

Lifestyle Elf – 21st Jan 2013 – No such thing as just a spoonful of sugar: new research on eating too much of it and its links with weight gain

BBC  5th March – WHO: Daily sugar intake should be halved