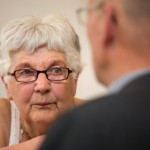 A randomised controlled trial published in the Archives of General Psychiatry has found that problem-solving therapy is a useful treatment alternative for elderly people with depression and executive dysfunction who do not respond well to conventional drug treatments.

The trial randomised 221 patients to either problem-solving therapy (PST) or supportive therapy (ST) and followed them up for 36 weeks.  The two treatments saw equal improvement in disability during the first 6 weeks, but PST was more effective after 9 and 12 weeks.

These results suggest that PST is more effective than ST in reducing disability in older patients with major depression and executive dysfunction, and its benefits were retained after the end of treatment. The clinical value of this finding is that PST may be a treatment alternative in an older patient population likely to be resistant to pharmacotherapy.