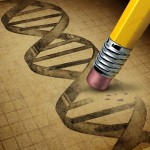 Symptoms associated with schizophrenia are often classified into two categories. The classical indicators such as hallucinations, delusions and thought disorder make up the ‘positive’ category whilst apathy and problems with concentration are ‘negative’ symptoms. These negative symptoms have previously been linked to decreased folate levels (Goff et al. 2004) and there is some evidence that folate supplements may be beneficial to some patients (Levine et al. 2006).

Treatment can however be complicated by the genetics of the patient. When considering folate supplementation, evidence suggests that individuals with a specific variant of MTHFR (a C677T change) respond better to this intervention. This hints at the need for a personalised medical approach to schizophrenia which takes patient genomics into account.

Now researchers from the United States (Roffman et al, 2013) have conducted a clinical trial to identify further genetic variants which indicate responsiveness to folate and B12 supplements. The variants examined reduced the function of their related genes and exist within the folate metabolic pathway, as is the case for the MTHFR variant.

Negative symptoms of schizophrenia, such as depression, may contribute to more disease burden than positive symptoms

Subjects were included if they were aged 18 to 68, psychiatrically stable, scored 60 or higher on PANSS and presented persistent symptoms despite antipsychotic treatment. The exclusion criteria included the presence of Parkinsonism, drug or alcohol abuse within the previous three months, those pregnant or nursing and individuals already taking folate or B12 supplements.

A randomised, double-blinded, placebo-controlled trial took place over 16 weeks. 140 subjects were divided into two groups (94 folate and B12 supplement, 46 placebo) of which 121 completed the full trial. These supplements consisted of 2mg of folic acid and 400ug of vitamin B12. Completion rates were not significantly different (P=0.47) and baseline folate levels were matched between the groups.

Folate levels were examined via fasting blood samples and clinical ratings were also conducted (SANS, PANSS and Calgary Depression Rating) all at 2, 4, 8, 12 and 16 weeks from the beginning of the study. At weeks 8 and 16 dietary variations were ruled out through the use of the Nutrition Data System for Research.

The present results indicate that supplementation of antipsychotic medications with folate and vitamin B12 improves negative symptoms of schizophrenia but only when accounting for common functional genetic variants in enzymes that regulate folate absorption and metabolism. Interestingly two of the genetic variants, MTR and COMT, were not found to be associated with the reduction of negative symptoms through supplementation. Of the variants that did, both led to a loss of function in their respective genes. This suggests that negative symptoms arise through insufficient absorption from variants of FOLH1 and MTHFR which is countered by increased folate and B12 uptake.

The findings also support previous evidence suggesting that folate and B12 supplements provide no improvement to the positive symptoms of schizophrenia, regardless of genotype.

Overall it seems that the supplementation of antipsychotic treatment with folate and vitamin B12 may be a suitable approach for the reduction of negative symptoms in  a specific group of schizophrenic individuals. Those who may benefit are those with reduced function mutations in the FOLH1 and MTHFR genes. This highlights a need for a more personalised approach to the treatment of schizophrenia but further research is required to confirm supplementation as a suitable treatment.

Two main limitations are acknowledged within this academic paper which support the need for larger studies in the future:

Further mutations which affect patient responses to folate and vitamin B12 treatment should be investigated as these may lead to advances in the treatment of other diseases. Suggested conditions include stroke risk, cardiovascular disorders and dementia.